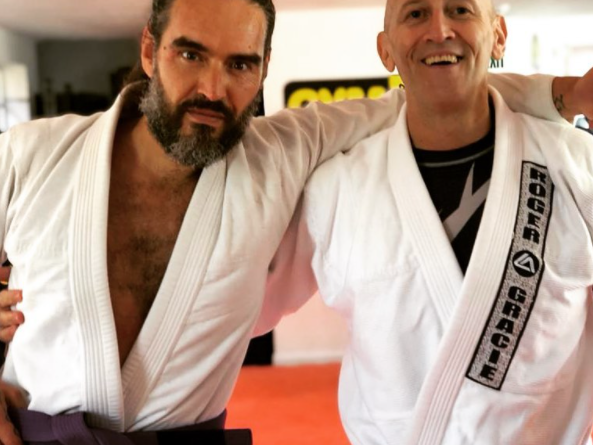 Brazilian Jiu-Jitsu seems to have become some sort of new trend amongst celebrities recently however many of them don’t spar and prefer to learn from private sessions to prevent injury. However, unlike the many, Russell Brand is frequently seen training in the regular classes on a regular basis; so the promotion to purple belt after over five years of training (he started training circa 2016) has been hard earned and well-deserved. Brand has such a passion for the sport he’s even recorded several YouTube videos devoted to the pros of the sport and how it’s helped him, watch below,

@russellbrand: “Big Day in BJJ. Honoured to receive my purple belt from @chriscleere. And also a purple eye (from @jacksonkickboxing).”

Many of the celebrities who choose to pursue BJJ in the UK find themselves approaching the same lineage as Brand as well, with Roger Gracie himself having trained a number of famous actors in his time (Henry Cavill, Guy Ritchie). It’s these connections that have led to him being invited to red carpet events and lifting the status of the sport as a result. Celebrities taking up BJJ and progressing in it can only ever be a good thing for the sport and everyone in it; it entices others to join and gives further exposure for the sport and the athletes and coaches within it.

An amazing accomplishment for Russell Brand, congratulations on the promotion.