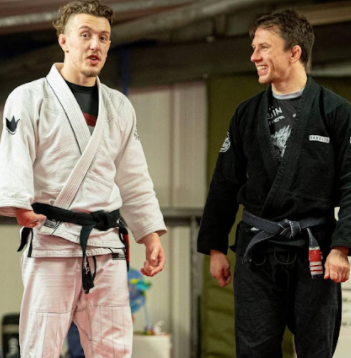 Sam Kaye is the first and currently only disabled BJJ black belt in the whole of Europe. Kaye trains at Lakes BJJ Academy in the Lake District, England under Ben Poppleton. Sam Kaye was awarded his black belt promotion back in May 2019 and has been training BJJ since 2009. Prior to training BJJ, Sam was a high-level swimmer in the disability league until he had to have shoulder surgery which ended up getting him into MMA, as he watched a lot of WEC and UFC whilst off injured.

Kaye has tried MMA, but the reason he doesn’t do it anymore is, “I didn’t like getting punched in the face. It’s quite simple really.” Having fought on Pantheon in the past, Kaye had a fair few comps in the pipeline until the pandemic came and disrupted everything in its way, “This beginning of 2020, we were lined up to do loads. I was due to do SUB15, Pantheon again, I was talking to GrappleFest as well and it all just went to shit.” His most recent fight was in January at the IBJJF London Open 2020 where Sam claims that “Marcus Phelan kicked my arse in the first round.” Sam says that Pantheon in the summer of 2019 was his most popular fight, Vs Ben Robson achieving a draw but states “I basically spent 10 minutes avoiding leg attacks and then told him to break my foot.” We all get like that sometimes.

The disability Sam has is a very rare and unique one, that means he doesn’t have two full-length arms. In relation to the condition he was born with, I asked Sam if he wouldn’t mind going in to a bit more detail about his arm, “So it’s just my right arm. They don’t actually know how or why. The go to explanation is that when you form as a fetus – your spine forms first and the idea is – the spine formed, and however I was laid – stopped my arm from forming properly. So I don’t have an elbow, my wrist doesn’t move, and I’ve got two fingers. It’s sort of half the length of my normal arm. The length of my elbow, I can move it but I can’t physically move it with just the muscles in that arm. My grip is literally just ..that.”

Talking about the rarity of his condition I wondered if he had ever faced anyone with the same/similar condition, he says, “I swam for years in among the disability leagues and I only ever met one other bloke that was similar to me. He was as close… Some people have their hands similar to me, but they’ve still got all of their elbow.”

Kaye jokes, “I think Jean Jaques Michado is similar to that. He’s still got his elbow, which is properly cheating – that’s all I’m saying. I’ll tell him that as well! The only other guy I know with an arm similar to mine is missing both of his legs so I don’t think it’s the same condition.”

Disabilities often bring you to a disadvantage in some way or another so I was curious to see if Sam’s arm had ever prevented him from participating in BJJ or made things difficult for him within the sport, “On sub-only shows you struggle to find opponents…In a sense of, it’s often enough just a lose-lose for them. If they win – they’ve just beaten a one armed guy – if they lose – they’ve lost to a one-armed guy. You see.” But still – whoever takes the win – takes the win and you’re both of the same rank. With over 10 years of BJJ experience Sam Kaye is no easy feat. He continues, “It bruises people’s egos you tend to find”.

Use Your Weaknesses to Power an Advantage

Obviously when you’re lacking over half an arm it can be difficult to perform certain submissions however Sam says, “All the basic stuff I like. I like solid arm locks and that’s it. That’s all I’m good at – arm locks. Chokes are sneaky. I’ll always go for a choke but if you f*ck up a choke, an arm lock should always be there. Always. Now I spend most of my training between 60-68kg I’m not strong at all but arm locks were always my thing… I think it was jealousy.” Jealousy? He continues to explain, “Everyone’s got two arms so I try and rip one off them. It is. That’s why I got good at arm locks. Level the playing field a little bit.” Well, why not?

When it comes to Gi or No-Gi most high-level athletes have a stern preference, however Sam prefers the Gi but actually is better in No-Gi, which is strange because you usually prefer the one you’re better at, he explains, “I prefer Gi but I’m better at No-Gi. I prefer the tactical game in the Gi, because there’s a lot more to grab and a lot more to be able to slow people down and workout what you want to do but everyone’s got two arms so they can grab twice as much as me so automatically I compete better without the Gi.”

Coach, Competitor, BJJ Black Belt, a Father of Three and Much More

Not only is Sam Kaye a BJJ black belt but he is also a coach, competitor, husband and father of three – so a busy man to say the least! Alongside all of this he’s also working on camps and seminars that he organises, he expands, “They’re really rewarding, and meeting loads of people in the community is great fun. In Oct 2018 I did a charity seminar too, with 12 blackbelts all teaching their own techniques to raise money for Premature Baby charities. I want to do more of them!”

The goals for now have moved away from personal growth and onto inspiring and helping others. Such as his younger brother, who he’s been training BJJ since he was 12 and is now 18. His brother is a BJJ purple belt but Kaye speaks of him incredibly highly, stating that the only reason he beats his brother is because he has a ‘psychological advantage over him’ due to being family.

Competing Most Definitely Isn’t Off the Cards Just Yet

However, competing definitely isn’t off the cards, “I’ll always compete – don’t get me wrong. I tend to just jump on things when people pull out last minute – I’m the person who jumps in. That’s how I got most of my MMA fights. Sod it – why not?” When asked who he would like to fight he decides he would want to fight someone similar to him, and picks out Nick Newell as a fighter he would like to have a match with – however he wouldn’t (necessarily) do an MMA fight. If someone fancies flying Sam Kaye out to America to fight Nick Newell – I’m sure he would be on the next flight! Likewise he states if there is ever an international competition for disabled athletes (besides the ones in Brazil) – he would love to participate.