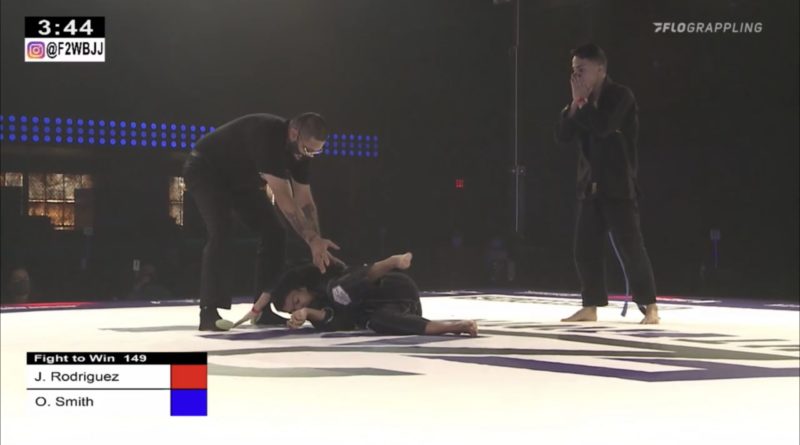 This morning I sat down with a cup of coffee and turned on the replay of Fight To Win 149 that happened Friday night, Aug 14 in Dallas.  Almost immediately, I got angry.

Two blue belts were grappling in a gi.  The grappler on bottom (the attacker), locked in a triangle on his opponent.  The grappler defending the triangle (the defender) stood, picked up the attacker and then slammed him to the ground.

The guard player then lost the triangle from the force of the slam.  In fact, he probably got a concussion because he couldn’t continue. He looked around wide-eyed and confused. The referee stopped the match and awarded the grappler who did the slamming the victory.

I wasn’t mad at the competitors. They were doing the best they could. I was mad that this was allowed to happen. Blue belts should not be allowed to slam. I didn’t expect this to bother me so much. But it did.  Probably because I’ve had my share of concussions and understand their impacts.

This sequence happens again and again.  Someone attacks a triangle, the defender stands and slams the opponent.

In Judo, a throw happens when both competitors are on their feet and there is a chance to break the fall properly. But the person getting slammed from this particular position in Jiu Jitsu is unable to break the fall.

Of course, an experienced grappler knows to hook the leg of the defender before they stand.  This prevents them from having the strength to get to their feet and stops the slam.  But lower belts sometimes miss this step.

Do we want beginners to have their brains rattled when they use bad technique?

To be clear, I’m talking about lower belts.  Experienced grapplers can slam and attack any submission.  I’m all for knee reaps, heel hooks and even spine and neck cranks.  If this had been two black belts, I would have enjoyed my coffee, anger free.

As a coach, I‘ve seen this in the gym.  A new student comes in and after a few months find themselves in the exact position I described.  Instinct takes over and they forcefully find their way out of the submission.

Once I realized this was an issue, I addressed it.  And guess what? There’s an easy fix.

There Is A Solution

Here’s how to handle this.  We establish a rule in competition and in the gym.  First, the defender of the triangle cannot slam.  Period. But, they can stand up.  If they do, then the attacker of the triangle has to let go.  In the gym, this is common courtesy.  If the attacker does not let go, they are taking advantage of their partner’s kindness.

This has to be communicated to students.  It should be printed on the handout we give to new members.  Also, we should remind our students “no slamming!”  Just the same as we remind them to trim their nails.

In competition, this rule needs to be communicated in the rules meeting.  During the match, a qualified referee will see this coming a mile away.  Once the defender stands and the attacker does not let go, the referee should stop the action and reset both on their feet.

The consequence of an error in technique, should not be brain damage — not for someone starting their Jiu Jitsu journey.  As instructors, gym owners, event organizers and referees we need to guard against this.

For the high level players who have spent years on the mat?  That’s a different story. My attitude for them is “have at it.”

But we have to give the lower belts a chance to improve.  It is our responsibility to look after them and create measures to prevent things like this. They’re counting on us.