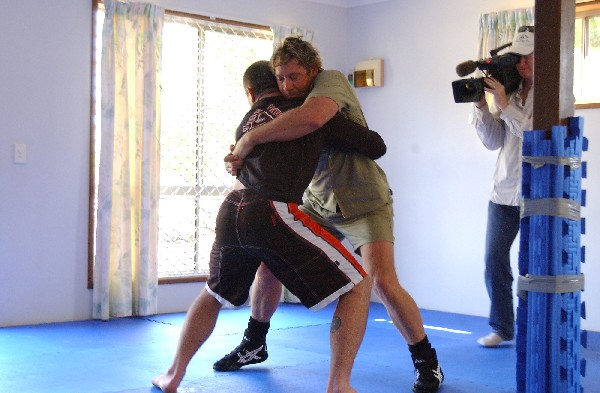 Last week marked what would have been the 57th birthday of the beloved conservationist Steve Irwin. Google commemorated the Aussie legend with a doodle and his fans joyously celebrated his life and his work. Despite PETA disgustingly trying to capitalize on Irwin’s death to further their cause, last week brought us the opportunity to remember Steve and in that time it came to light that he loved to grapple.

While we’re used to seeing Irwin wrestle crocs, in an album posted on reddit, we can see the great man practicing takedowns and back control. Delving further into Irwin’s history with martial arts provides us with some more interesting nuggets, most notably the impact he had on the career of former UFC fighter Kyle Noke.

In an interview from 2010, Noke spoke about how Irwin paid for his flights to the USA “He sponsored me and paid for my first flights to the States. He really pushed me to follow my career and follow my passion.”

In addition to helping him financially, Noke went on to talk about how Irwin helped him in the training room:

”He used to help us prepare for fights,” he said. ”He had such an eye for detail through what he had been doing for so many years. You only have to watch the guy on TV to know how much passion the guy has got. If I could channel that passion in fighting for wildlife then that’s a great start.”

This is just one example of how Irwin helped to build up the people around him and shows why he is still so missed today.