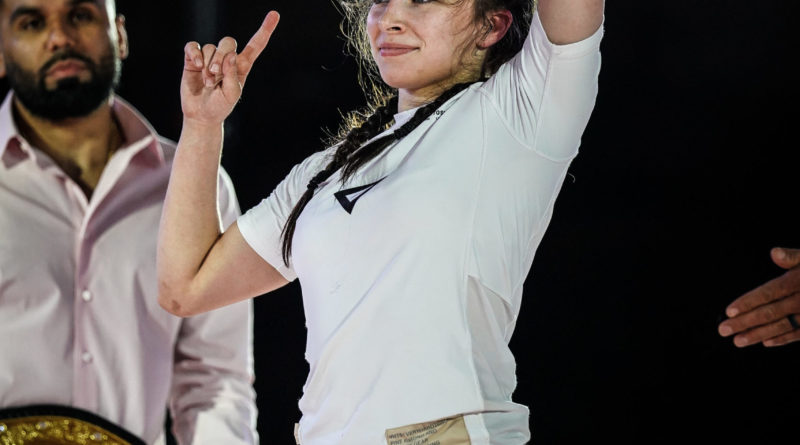 Women got it done at Submission Hunter Pro 60 (SHP60). With the elevated mat came elevated status as the main event featured a UFC fighter opposite a rising star, all live-streamed on UFC FIghtPass. In the main event, Danielle Kelly defeated the #8 UFC women’s flyweight Roxanne Modafferi. Female grapplers from all over the country — hailing from prominent schools to the smaller community centers — rose to the occasion, with The Rose as a beneficiary, in observance of Breast Cancer Awareness Month.

Modafferi, the early aggressor started with a single-leg takedown attempt, but was stuffed. Kelly pulled guard, but went back to face her opponent on the feet. Modafferi took swift action and landed a single-leg which succeeded this time. Kelly’s bottom game dominated as she kept hunting for leglocks for the duration of the match. Modafferi pressured forward, made several attempts to pass Kelly’s guard and prevented any leg attacks for a few minutes. Kelly transitioned to single-leg X guard and went for a heel hook, only to be defended by Modafferi rolling to escape.

At one point, Kelly went for another heel hook which Modafferi evaded and ended up inside Kelly’s closed guard. With Modafferi’s size advantage and double wrist control, she managed to open and pass the guard, then proceeded to north-south. Kelly managed to recover her guard and even managed to come up on top. This started the sequence of events that began with Kelly going for a leg entanglement that led to Modafferi coming back on top only to end up with Kelly entangling one leg in an ashi garami and securing a toehold on the other while Modafferi tried to escape.

After 20 seconds of grip fighting, Reyes pulled guard, ending up in half-guard briefly before coming up to a single-leg takedown attempt which was stuffed and defended. Exell tried to pass the guard, but got stuck in quarter guard for some time. She kept pressuring on until she managed to free it and take the mount. It was so tight that Reyes’s elbow-to-knee escape attempts from both sides failed. Exell attempted some submissions from the top and stayed on top mount for about three minutes until it ended in a draw.

Hallock pulled guard, but swept Johnson after a few seconds, then passed the latter’s guard. Johnson recovered and it looked briefly like she was going for a tornado sweep. Hallock remained on top and worked to secure the mount with 3:46 to go. She transitioned to arm triangle, but Johnson defended with a lockdown on the opposite leg and escaped with 2:35 left. Hallock regained mount with less than two minutes to go. She transitioned to north-south where she got the lapel grips and the choke as she returned to mount.

Morais initiated the action with a kneebar sweep, but Holy returned the favor with a  double-ankle sweep. Sweep attempts occurred back and forth with a few leg entanglements. They returned to standing with 2:40 to go. Morais passed Holy’s guard as the latter was pulling guard. Morais opted for north-south mount, then transitioned to side control with 80 seconds remaining. Holy managed to get up and Morais attempted a guillotine which Holy defended rather easily.
As regulation ended, they had to go to a tiebreak which followed IBJJF rules (four minutes) – collar ties briefly then Holy pulled guard. Morais passed with 2:30 left, but Holy recovered, returned to standing. Morais pulled guard. In the end, Holy secured the win and the belt with two advantages.

Garcia Promotions ran the show in a highly professional manner, punctual and well-organized, and not one single push-out or any untoward incident occurred. The referees are also to be commended, being very attentive and protective of the competitors at all times. All photos were shared by the promotion, with special thanks to their media director, Richard Burmaster.