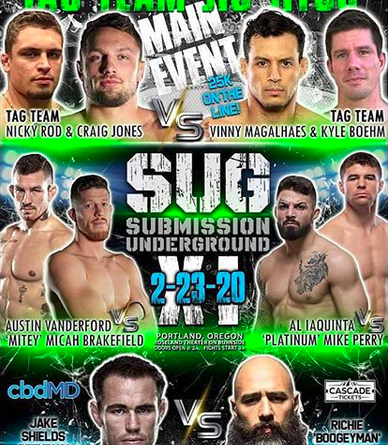 Chael Sonnen’s Submission Underground is back for event number 11, with a lineup of MMA fighters and grapplers. Most interesting of course is the main event, which will be a tag team match between Craig Jones and Nick Rodriguez on one side and Vinny Magalhaes and Kyle Boehm on the other. Further down the card, we’ll also see some elite grappling from the likes of Jake Shields or Richie “Boogieman” Martinez, and some unusual names on the professional grappling circuit, like Austin Vanderford or Mike Perry.

This is part of a stacked weekend of grappling with the Artista Invitational 2 and the first ever Substars event also taking place.

The ruleset is fun to watch, if not very “pure” Jiu-jitsu. As the name implies, two team members fight at a time, with the others waiting in their respective corners. At any time a fighter in the center can tag his teammate in without any break in the action. The team with the most submissions by the end of the time limit wins.

This leads to all kinds of exciting scrambles, as you can get attacked from unexpected angles. It is also virtually impossible to finish a submission in your opponents corner. Being able to choose where the fight takes place makes a huge difference.

With Rodriguez’s wrestling background, he should be able to pick up his opponents and pin them where he likes. Craig Jones’ leg attacks and overall stellar Jiu-jitsu should give him the ability to capitalize on openings and finish quickly.

It is important to remember that leglocks don’t work on Vinny Magalhaes, but even with this advantage, it seems like the overall odds are in favor of team Rod/Jones.

Here there is no shortage of MMA fighters, as you might expect in an event promoted by an ex-MMA fighter. The most baffling matchup is Mike Perry vs Al Iaquinta. Although both are purple belts in BJJ, they have one professional submission win between them (Iaquinta by anaconda choke.) Given Iaquinta’s wrestling background and the fact that his purple belt is from Matt Serra, it seems like the match should be a lock for him.

Austin Vanderford vs Micah Brakefield promises to be a fun fight. Brakefield delivered back at both the CJJ Worlds in Mexico and in his last appearance on SUG. Vanderford has an undefeated MMA record, but sub-only is a whole different animal.

And once again Jake Shields is back, this time against Richie “Boogyman” Martinez. Boogyman of course is known for his insane flexibility and rubber guard. Shields’ pressure might be enough to shut that game down, but probably not to pass and finish. Being a 10th planet blackbelt, Martinez will have the experience advantage should the match go to overtime.

For tickets to the live event on February 23rd in Portland, Oregon, click here.