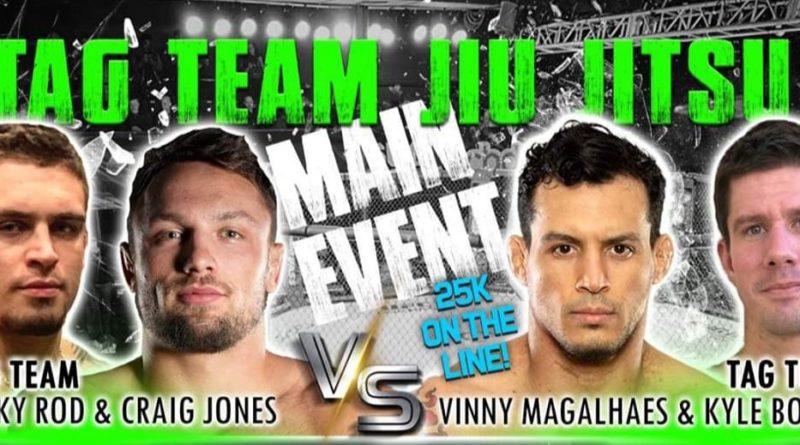 Chael Sonnen’s Submission Underground 11 has come and gone, after bringing us a night full of elite grappling, the full results are finally in. The event featured a number of high-profile bouts including an unusual headliner as Vinny Magalhaes teamed up with 10th Planet’s BJJ Fanatics Grand Prix Champion Kyle Boehm to take on Craig Jones and the Danaher Death Squad’s in-house wrestling machine Nick Rodriguez in a tag-team match for a $25,000 prize put in place by Chael Sonnen himself.

The event also featured appearances by both Danielle and Mike Perry, although they had rather different results. Danielle lost to Samantha Bonilla in the first overtime round, whereas Mike Perry took the win over Matt Serra purple belt, Al Iaquinta via fastest escape time. This was a welcome change for Mike Perry after he hit a two-fight losing streak in the UFC and was recently in hot water as a result of his offensive language.

Chael Sonnen’s brainchild also gave us a number of great finishes, including Richie “Boogieman” Martinez getting an unbelievably quick Armbar finish against Jake Shields in the second overtime round on the main card.

While the event used EBI overtime rules throughout the lineup (other than the tag-team main event) there was one example of controversy coming from the use of these rules. Austin Vanderford was awarded the victory via Arm Triangle in the first overtime round, but his opponent escaped the back control that Vanderford had and he only caught the Arm Triangle once his opponent had escaped back control.

For all of the build up that this event enjoyed and considering the fights that led up to it, the main event was somewhat of a let down. No fault of the fighters involved really, but more a reflection of a ruleset that simply wasn’t going to work with elite grapplers competing for huge cash amounts. Both Vinny Magalhaes and Nick Rodriguez were attempting to play to the ruleset in order to ensure a victory, which I don’t think anyone can blame them for. The specific rule they wanted to take advantage of was the fact that when one fighter tags in his teammate, he then has a 3 second time limit to stop grappling which essentially allows for a short two against one scenario.

At this high of a level, two against one is effectively a death sentence. If you can’t see why, just imagine being in Craig Jones’ guard while Nick Rodriguez jumps on your back. You’d be lucky to make it past 3 seconds. This led to a relatively uneventful match as Magalhaes was content to stay on his back close to his own teammate, Kyle Boehm, while Rodriguez was intent on getting a hold of one of his legs and dragging him back to his teammate, Craig Jones.

As a takeaway for the event, Tag-team Jiu-Jitsu is really fun to watch and can produce some crazy moments but for elite grapplers it just isn’t as exciting as a normal Submission Only matchup. Either that, or some amendments need to be made to the ruleset in order to guarantee a more consistent stream of action.