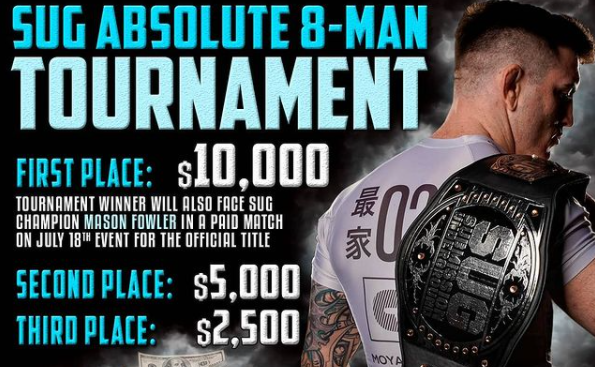 On June 27, Submission Underground (SUG) will host an eight-man absolute tournament to determine who will be next in line to challenge Mason Fowler for his SUG title. After announcing the tournament participants one-by-one over the past couple of weeks, the full line-up is now set, and it will feature some of the most talented and dangerous grapplers in the world, all vying for a shot at Fowler and a $10,000 purse.

Both Roberto Jimenez and Pedro Marinho immediately jump out as strong contenders to win the entire tournament, as both men are regular and active competitors at the highest levels of grappling. Jimenez competed in this same tournament in 2020, losing in the finals to Fowler. Marinho also holds a win over Jimenez, and has been a very active no-gi competitor for the past several years.

While Jimenez and Marinho might be two of the most recognizable names, it’s worth noting that when Fowler won the tournament in 2020, he was lesser-known than many of his opponents. As Fowler himself has discussed, the unique SUG ruleset requires a specific set of skills with specific preparation; competitors in more traditional points-based rulesets are often unprepared for SUG.

To that end, a lesser-known grappler like Kyle Boehm, with his size and 10th Planet background, could be poised to make a run through the tournament. Another dark horse to watch is Adam Smith, who is 2-0 in SUG and is coming off an overtime submission win over Fowler’s teammate, Benji Silva.

How to watch: SUG 24, featuring the absolute tournament, takes place on Sunday, June 27 and will air live on UFC Fightpass (subscription required).