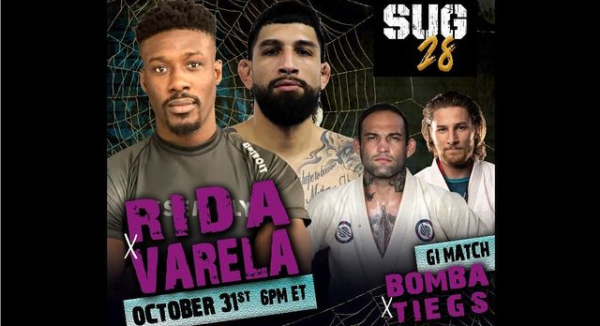 Rida is a no-gi competitor known for his athleticism and takedown ability. He is a two-time American Nationals no-gi champion, and recently earned third place at the WNO Championships on the strength of wins over ADCC champion Orlando Sanchez and Giancarlo Bodoni. Rida finds himself as a sizable favorite over 10th Planet representative Varela. A one-time SUG title challenger, Varela holds notable SUG wins over Satoshi Ishii and Kevin Casey, and his experience competing under the SUG ruleset could serve him well against SUG newcomer Rida.

In the co-main event, 16-fight pro MMA veteran Guilherme Vasconcelos is an underdog to Aaron Tiegs in a gi match. Tiegs is an impressive 7-0 at SUG.

How to watch: SUG 28 takes place on Sunday, October 31 at 6 PM EST and will air live on UFC Fightpass (subscription required).