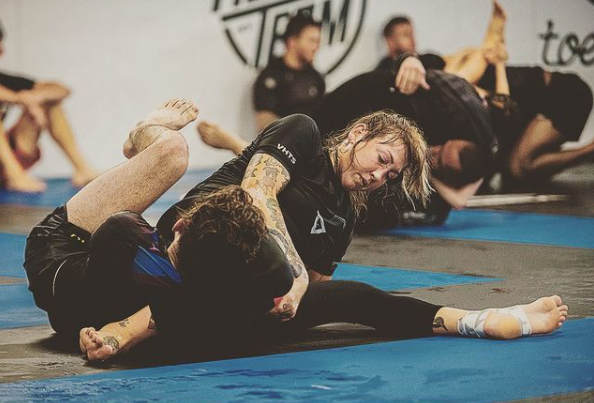 On September 25, the long-reigning Submission Underground (SUG) champion Amanda Loewen will make her Who’s Number One (WNO) debut at the WNO Championships. A black belt for nearly eight full years, she is stepping into the deep end of the women’s heavyweight division where she’ll be facing the world’s absolute best grapplers in 15-minute submission-only matches.

Loewen is already an accomplished competitor and, thanks to her time with SUG, has become a recognizable name in jiu-jitsu. But with that said, the WNO Championships will be a new and unique challenge for her. The WNO ruleset is a stark departure from the five-minute EBI format used by SUG that she has been competing in for the last 15 months. Moreover, Loewen has never before faced any of the other grapplers in her division.

But for Loewen, jumping head first into the unknown is nothing new. She started jiu-jitsu 13 years ago without a clue of what it entailed.

“I worked at a tropical fish store that was around the corner from my first gym… And I would walk by and I thought that everyone was doing karate. I had never heard of jiu-jitsu,” Loewen told Grappling Insider.

“I’m really glad it was jiu-jitsu and not karate. It just started from there. I was going to school full-time and working and quickly realized that jiu-jitsu was the only thing I wanted to do, so quickly quit everything else and tried to pursue that.”

Loewen was hooked, and just about two years after walking into that gym, she was all in on jiu-jitsu, training and teaching and learning to teach.

“That was the first physical thing I had done in a very long time, and I legit fell in love with it.”

Fast forward a decade, and Loewen now finds herself as one of eight competitors in stacked division in what might be the biggest no-gi event of the year. She’ll be sharing the mats with ultra-accomplished and established competitors like Gabi Garcia, Ana Carolina Vieira, and Elisabeth Clay.

Loewen holds a healthy respect for her competition, but isn’t showing an ounce of trepidation going into the tournament. Instead, she’s simply looking forward to the experience and grateful for the opportunity.

“Eddie Bravo invited me personally and asked me if I wanted to do the heavyweight bracket, and I was like ‘well why not?’ I’m about 145 [pounds] so right at the line, but I roll with people that are bigger than me all the time, and I feel like it’s a great opportunity. I definitely didn’t want to miss out on something like this and the bracket is just stacked with such phenomenal grapplers. The opportunity to be invited to something like this was really huge for me and being able to have the opportunity to roll with these girls is also incredible.”

Grateful as she is for the opportunity to compete on a big stage against the world’s best, Loewen still plans to turn heads. She recognizes that, because she’s a relative newcomer to WNO competition and has been competing under the SUG ruleset, many might assume she’s not prepared for the longer submission-only matches.

“I know I’m the underdog and maybe people will underestimate me, but I’ll roll forever,” she said. “I don’t hate the EBI overtime rules, but I hate the 5-minute [SUG] matches. I think that’s absolutely ridiculous when you’re rolling with such a high level opponent, and five minutes is really not a lot of time. So I’m looking forward to these 15-minute long matches, 30 minutes. Give me a couple hours. Submission-only, no-time limit, that’s my preferred ruleset, to be totally honest. I think that’s pure jiu-jitsu because someone will have to die.”

For fans that are unfamiliar with Loewen’s brand of jiu-jitsu, she can’t promise the all-action, all-offense, submission-hunting approach that many competitors claim to have. Quite the opposite, Loewen is a firm believer in the adage of “position before submission.”

“You can expect to see probably some real boring, technical, slow jiu-jitsu,” Loewen said, laughing but only partly joking. “I would like to say that I’m very good on defense, and I do have very good offense, but I take my time. And I feel like I’m very calculated and I don’t necessarily like to risk too much. Finding the line between risk and reward is really important to me and making sure that I show and display beautiful jiu-jitsu, that’s really important to me…

“It’s always position before submission in my book… I feel like my game has always been taking my time and really trying to control the position, staying safe. My jiu-jitsu might be like a defense sandwich. So it’s defense, offense, defense. Instead of just offense, offense, offense.”

Loewen will compete as a representative of 10th Planet and her home gym of 10th Planet Portland. But she’s only been under the 10th Planet banner for about two years; she has over 10 years of experience training and competing in the gi at her previous academy, Straight Blast Gym. That background in a more traditional approach to jiu-jitsu may surprise fans that assume she’ll play a 10th Planet style. And while she is continually adding to and updating her game, it remains grounded in the principles of classic, Rickson Gracie-style jiu-jitsu.

“I don’t think that you’re just gonna see me hop on a leg lock because I’m wearing a 10th planet rash guard,” Loewen said. “I think a lot of people know that I’ve been training at 10th Planet, but they don’t necessarily know my background. I trained in the gi for a very long time and I still train in the gi, because I think both games are very important and shouldn’t necessarily change whether you put the gi on or take the gi off.”

Going into the WNO Championships, Loewen understands that she’s an underdog, a dark horse. She knows she’s entering a world where she’s an unknown commodity. But above all else, Loewen is excited to compete on a big stage, against the best grapplers on the planet, for a purse that is essentially unheard of in women’s jiu-jitsu.

“Even through some of the IBJJF stuff you could win money for some of these tournaments,” she said. “The women’s were never equal to the men’s, so the fact that FloGrappling — I think the first prize is 30 grand or something wild like that. I’m like, ‘ah shit, I’m gonna buy a house!’ I think that’s huge. Then not only is there first place but they’re allowing second and third, so I think they’re really kind of highlighting yeah, you guys are working really hard and it’s not just the first place winner but second and third, so I think that’s really really cool. Just the opportunity to be on such a big stage I think is really neat.”