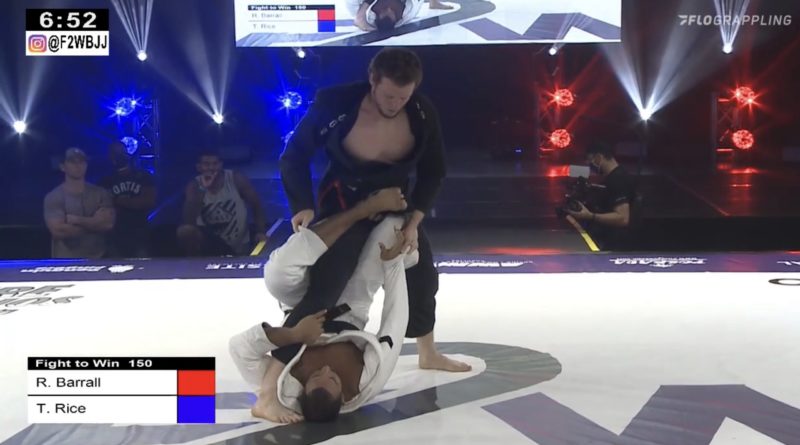 The main event of Fight 2 Win 150 on Friday Aug. 21, had all the ingredients to be an exciting match. American Nationals champ Tanner Rice, took on ADCC gold medalist Romulo Barral. But the majority of the bout took place with both competitors on their feet.

There were crafty sweeps, escapes, takedowns and guard-passing attempts, but in the end fans were left wanting more. Ultimately, Barral won a split decision in what had to have been a hard match for the judges to decide.

On his way home, Rice gave me his thoughts on the match, what he wished he would have done differently and his plans for the rest of the year.

Rice’s Thoughts On Match Against Barral

GI: Tell me your thoughts about your match this weekend.

Rice: It was fun fighting a guy like that. I was a little disappointed in that I wasn’t able to take him down or play a little better passing. But you know, it is what it is.

GI: It’s tough in that ruleset of ‘no points’ and submission only. Especially wearing a gi with short time. It makes it tough to get stuff going right?

Rice: Yeah, it’s definitely hard. The guy is in great shape, you know, and it’s hard to wear a guy like that down in that amount of time. To get even close to a submission, it’s hard.

GI: How was the weight cut?

Rice: I was already on this weird diet that my personal trainer had me on. So I already lost like 13 pounds and then I had to lose another eight more before the match. So I did have to sauna a little bit, but it wasn’t a crazy bad cut.

GI: Is there anything you would have done differently if you could do it again?

Rice: I felt like afterwards, I had a little more in the tank. Every time I tried to take him down, he was so close to the edge. They had to pull us back in. So I wish I would have maybe pulled guard, or shot a few submissions at the end — just to attempt something else besides what I was doing.

GI: How is the training right now? Is your gym open?

Rice: Yeah it’s open. Training’s great. We’ve got a ton of people because there is no wrestling, football or anything. But it’s been an interesting year for sure.

GI: Do you have any competitions coming up?

Rice: I want to do Oklahoma and Austin (International Open IBJJF Championship). I want to compete a lot. I was competing a ton at the beginning of the year before lockdown happened. But I really wanted to compete twice a month for the whole year.  Obviously that didn’t work out. I’ll definitely be doing Pans in Florida.