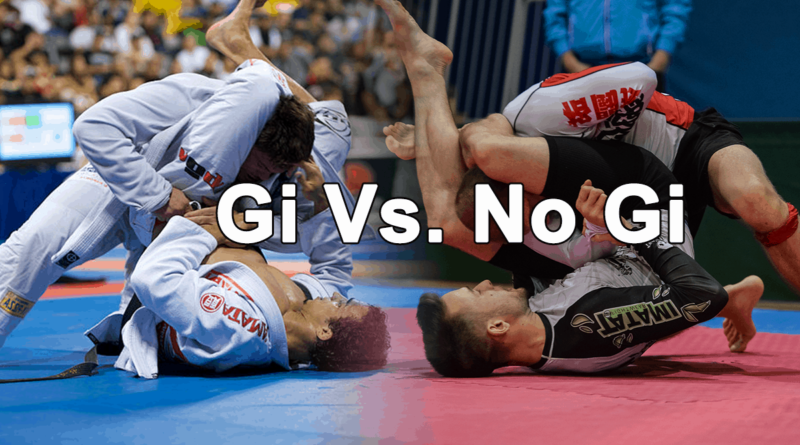 The gi Vs no-gi debate is something you will come across during your time on and off the mats. Some believe the gi is better, because you can also take what you learned to no-gi. Others believe no-gi is better because it’s more realistic to real-life situations. No matter what your rank in Brazilian Jiu Jitsu, you will develop a preference — gi or no-gi — or there will at least be one that you favor. The debate of gi Vs no-gi is incredibly apparent, especially when rolling with MMA fighters. Most people in your gym will have preferences as to what Jiu Jitsu they prefer, and why. There are ‘pros and cons’ to both Jiu Jitsu styles. The principle is the same, but the opportunities are different.

I much prefer the gi. Even though I started training BJJ no-gi, when I began training in the gi I learned how many more opportunities are available to submit and control your opponent. You can take your time, hold someone in a position longer if you’re both fighting in the gi, in comparison to fighting no-gi. The gi can buy you extra time to stall and think about your next move. Plus, in the gi you can use your own gi or your opponent’s to help submit — as well as (most of) the no-gi moves.

Contrary to the gi opening up more opportunities, the no-gi grappling style is closer to real-life street fighting. It’s fast and you won’t always have access to material when fighting on the street (if they are shirtless or their clothes are ripped, for example). However, British BJJ black belt (under Eduardo Carriello at Gracie Barra Oval) Luke Spencer says he favors the gi.

“I much prefer gi as there’s more subs and more options, but I also prefer the workout itself. I mean grabbing hold of stuff is inherent with a ‘fight’ so it’s really hard to prevent that sometimes.”

When asked if that means he thinks training in the gi is more applicable to a street fight scenario opposed to no-gi, Spencer continues:

“To be honest, no I don’t. I do agree that overall no-gi is more likely to resemble street fighting, more so because of its intensity and fast pace. Gi and gripping could be said to be more like street fighting due to the grips, but unlikely to be useful in a real scenario as normal clothes would probably tear and rip. That’s why I prefer gi as a workout because you can use that instinct to grab, and take it further than you might be able to in a street scenario.”

The added control of your opponent via the gi helps you take things that one step further than you would probably ever be able to take it in a street fight, which is why training in the gi can be so engaging. Others prefer no-gi because of how similar it is to street fighting.

Your Goals As A Fighter

Bellator MMA fighter and BJJ and Judo black belt Andy ‘Predator’ Manzolo says the decision between gi and no-gi often depends on your goals as a fighter: “I prefer to compete in gi because you’re looking cooler, plus you can use much more technique. In my opinion, if you are a BJJ fighter you always need to be able to love BJJ in the gi — whereas if you’re MMA then, of course you need to practice more no-gi, and forget about many moves what you can use in the gi.”

Your goals as a fighter do have a big part to play in your overall preference, I think. A lot of MMA fighters tend to prefer no-gi as it’s the grappling style they use when in the cage. However, I think even when you’re an MMA fighter, if you love Jiu Jitsu, you’ll enjoy wearing the gi as well – because even though some of the moves won’t be applicable for MMA like collar chokes, you can still integrate skills and knowledge from the gi classes into your no-gi training.

It’s Up To You

There’s different reasons to favor either one. Both grappling formats bring different skills to the table. It depends entirely on your goals and what you want to get out of BJJ.

Even though there are more ways to be controlled and submitted in the gi, fighters may also prefer it due to the friction of the cotton slowing down the fight and giving more time to think about your next move. Also, the gi enhances your grips and gives room for more technique that you can’t do in no-gi.

Others may prefer no-gi because this grappling style is closer to street fighting, and is a lot more up-tempo in comparison to fighting in the gi, plus the rulesets are more relaxed for no-gi. No-gi grappling is also more applicable to MMA, so MMA fighters may not enjoy the gi if they don’t train often in it, and may find themselves getting caught in moves that wouldn’t happen in the cage. With no-gi you’re more likely to slip out of positions and slip into submissions due to the fast pace and combination of sweat and the slippy spandex material which makes it more of a scramble.

Try both out. See what works best for you. Ultimately, it’s just a matter of personal preference.

Lucy Wynne has 91 posts and counting. See all posts by Lucy Wynne