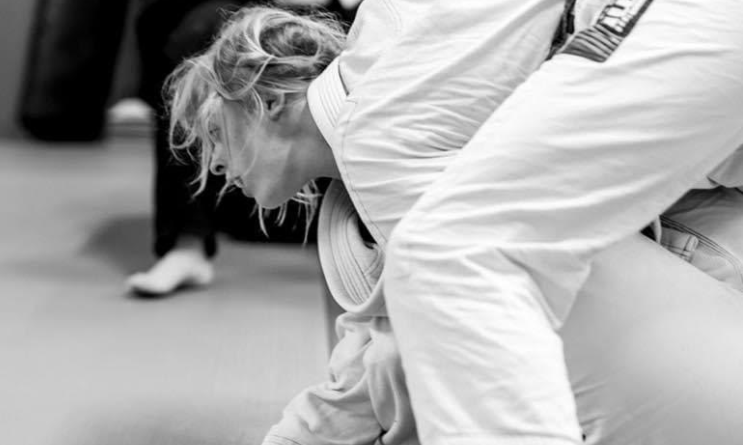 Being a woman in any male dominated industry can be tough, but at times, it can depend on your approach and your attitude towards what you’re doing. BJJ is addictive. You want to constantly learn and progress and feel and see your own progress. Now being a woman can make this sort of stuff difficult at times and sometimes you can feel like you’re at a stand-still. All the big white belt guys in class are dominating the fights between you two and you feel as though your skill and technique has just gone out of the window as soon as a 100kg 6’4 white belt flattens you with their whole body weight every time you roll.. But women and small men alike; I’m sure small men also feel this pain.

Being Flattened by Mat Bullies

However, I think men have more of an agenda to hurt you when they see not only are you a woman, but you’re also sporting a coloured belt. Being a small, petite blue belt woman I feel as though I’m a prime target for all the ego absorbed white belt hulk’s in the room. They see me as a challenge to crush, rather than someone to learn off/ learn with. If you’re twice the size of me you’ve got a good chance of being able to crush me via brute strength without needing any technique – but what exactly do you gain from this? You aren’t practicing your BJJ, you aren’t helping me, or yourself, and if you were to roll with someone your own size – you’d get eaten up because your skill level remains at 0. If you win via brute strength as opposed to literal BJJ technique – you haven’t won – especially if your opponent is half your weight and height. Just remember that. Dang mat bullies!

Also, the lack of female representation in BJJ makes it difficult to apply for comps at times (so I have found), especially as a white belt as a lot of white belt females don’t compete. You sign up and you’re lucky if you have one match, which makes it difficult to be able to grasp an opportunity which tests out your skills to its maximum capacity, as rolling with someone your own size/ same level creates an even playing field – as opposed to consistently rolling with men twice your size.

Being a woman can make things harder, yes, but you become appreciative of the challenges you face. Fighting bigger people means you have to fight harder, and smarter. You’re learning to control and submit an opposition who is twice your weight, and succeeding at it. How well would you be able to exercise that on someone your own size? Pretty well IMO. The little guys are the ones you have to watch out for because they have to try a whole lot harder than the big guys in the gym, including the females. Females are naturally less muscular than men, however we usually have increased flexibility which can most definitely come in handy with BJJ. My flexibility allows me to have an advantage over my opponent at times, when it comes to submissions like groin stretches, kimuras, and regaining guard again for example.

I had previously written a satire article which states the menial things that makes BJJ tough for women, if you want to have a read click here. That article states about periods, hairstyles, fake tan, nail varnish… you know… girly things – that BJJ sometimes (most of the time) gets in the way of.

Not to forget the absolute predators you come across at the gym. As a female walking into a new gym you just hope you’re not mistaking their flirtation for kindness and likewise you hope people aren’t mistaking your kindness for flirtation. I’m here to train. If I was interested – I’m sure I would contact you. There’s nothing wrong with shooting your shot, but if it’s not the same vibe – leave it – save the awkwardness. No one wants to feel awkward when they go to their gym, it’s supposed to be a place you can unwind and mingle amongst like-minded people. Fortunately I’ve not had too many bad experiences regarding sexual predators at the gym, but everyone knows a few women that have, and it shouldn’t be that way. The mats should be a safe environment for everybody.

Fighting on an Uneven Playing Field

Pay inequality can also be a problem for women in BJJ; they don’t get paid the same as men at comps and most of the time they don’t get paid at all. Submission Hunter Pro has proved there’s clearly a market to watch female BJJ fighters, and clearly money to be made too – for both the fighters and the promotion. Ffion Davies Vs Magdalena Loska headling Polaris Squads in a submission only non-title no-gi fight – again proving that women can do it just as good as men if not better – catching the submission in under five minutes; whereas only one person (Tom Halpin) from both teams on squads also managed that. When I interviewed Women Who Fight, they said. “The idea that there aren’t enough women to legitimize paying them equal prize money is ridiculous as shown by female only promotions (i.e. Submission On The Shore) where there are plenty of women wanting to fight.” Men may have been the superior gender when it comes to martial arts, but not for much longer. The women are catching up and doing us proud.

Sports bras. You men are lucky, you don’t have mammary glands sitting on your chest that bounce with any small movement. Sports bras can be an absolute nightmare to find for BJJ as you need full support. When you’re fighting you want your tits stuck to your chest not jiggling around as you’re moving – it really is not ideal. And to be fair… it makes things a lot harder. If any women have any recommendations for good sports bra brands – I’m all ears! And for all the tough women that have stuck it out, keep going, and keep doing the women in martial arts proud. The community is growing, and more and more women are starting BJJ which is absolutely fantastic – I can’t wait to see what the future holds for female fighters. Keep on fighting! #OSS

Lucy Wynne has 121 posts and counting. See all posts by Lucy Wynne