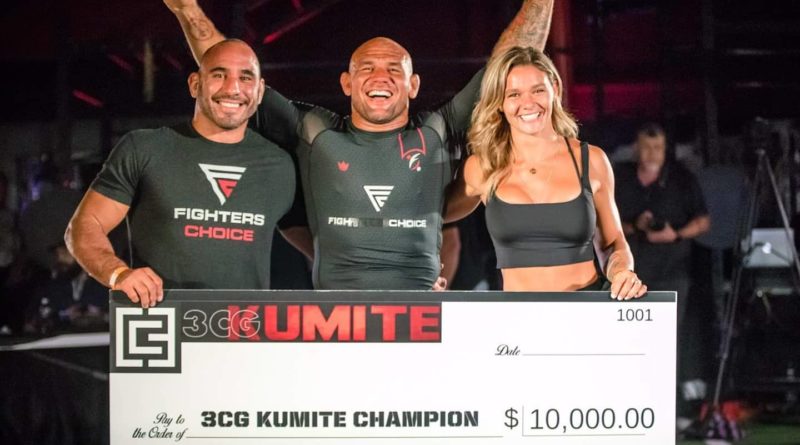 Third Coast Grappling is on a streak more dazzling than Comet NEOWISE, having had four stellar Kumites in a little over a month. Third Coast Grappling: Kumite IV, the latest installment, had the same eight-man tournament with updated rules,* seven superfights, a charity exhibition match involving Gordon Ryan, and a rambunctious pack of kids in a “Grapple Royale” a la “Royal Rumble.” Not even a near-melee** mellowed the mood as the firecracker of a show refused to fizzle out, ending the action-packed night with a grappling legend becoming ten grand richer.

Roberto Jimenez versus Nick Rodriguez
Promising phenoms Jimenez and Rodriquez initiate the Kumite. Notable size disparity with the size advantage going to Rodriguez but the grappling experience to the younger Jimenez. In a battle between explosive wrestling versus dynamic Jiu-Jitsu, the only points scored were from Rodriguez with an uchi mata that landed him in Jimenez’s half-guard. Most of the match was spent with Rodriguez in Jimenez’s closed or seated guard, with the former taking multiple attempts to pass or disengage and the latter retaining it and attempting sweeps or submissions, all to much fanfare but not much in the way of progress even into overtime. Jimenez proceeds to the next round via referee’s decision.

Roberto “Cyborg” Abreu versus Arnaldo Maidana
Cyborg and Maidana go up next. Majority of the time in regulation was spent on their feet, with grip-fights and collar-ties near the center of the mat. It went to overtime without a point. There, Cyborg scored first points with a takedown to move on to the next round.

Fellipe Andrew versus Lucas “Hulk” Barbosa
Andrew and Hulk are the third of four matches in the first round. Hulk secured first takedown and immediately attempted an armbar. Andrew managed to escape pretty quickly, after which he got on top inside Hulk’s guard and knee shield. Immediately after being reset in the center, Andrew went for Hulk’s foot on the same side as that knee shield. Hulk turned away to escape and turned back in to attempt a toehold of his own. Andrew defended then went for a heel hook that Hulk defended successfully, with the latter ending on top. With Hulk hovering in his open guard, Andrew snapped on a triangle armbar within regulation to qualify for the next round.

Gabriel Almeida versus Guilherme Augusto
We find Almeida and Augusto on their feet, with grip-fights and collar-ties near the center of the mat. (FloGrappling had camera troubles at this point that took more than three minutes to be resolved. No new development was missed.) At overtime, Augusto went for a double-leg attempt that Almeida stuffed with a guillotine. The former escaped it and ended up on top north-south but the latter refused to let go of his neck, eventually finding his way on top and still with the neck. He almost earned points on two occasions: one for taking the back but failed to either put both hooks in or get a body triangle (one of the new rule additions) and for a takedown that ended up with him almost getting the back again. Almeida won via referee’s decision.

Cyborg vs Jimenez
For a second time in as many matches, Roberto Jimenez finds himself opposite a larger opponent, this time in Cyborg. There were plenty of takedown and sweep attempts but neither man yielded. Jimenez pulled guard and both were active. Finding themselves standing again, Cyborg hit a blast double-leg takedown on two different occasions to garner four points. The rest of regulation saw them trading attacks and defending well. At overtime, Cyborg almost landed a suplex but it was more of the same. He went on to win via referee’s decision at overtime.

Andrew vs Almeida
Andrew struck first with a flying guillotine attack that didn’t quite land flush. Almeida managed to catch a leg near the edge of the mat and after being reset went for a takedown that he pulled off with a footsweep. He almost secured the back, a scramble ensued that resulted in Andrew getting on top and inside Almeida’s guard. Almeida attempted a leglock first which Andrew defended well and went for a heelhook which almost instantaneously resulted in a verbal tap by Almeida who was visibly hurt. In a fantastic display of sportsmanship and respect, Andrew helped Almeida off the mat after being declared the winner.

Cyborg vs Andrew
The two faced off and wrestled standing until Cyborg initiated a snapdown which prompted Andrew to pull guard but was not able to fully close it. Cyborg passed to side control in quick fashion. The two spent some time there near mat center until a scramble ensued. At one point Cyborg almost took Andrew’s back but Andrew managed to roll out of it. Andrew was going for a double-leg takedown that was immediately met by a ten-finger guillotine choke that only someone with nerves of steel can do in cold-blood. Someone like a Cyborg.

Rule changes:
-“Body triangles count as 4 points.
-If you go out of bounds the refs will reset you in same position best they can in middle of mat. No neutral restarts.
-Penalties will be heavy. You stall your opponent starts getting points and you start accruing penalties and losing points.”
(from 3CG Facebook post)
Mona Bailey versus Nathalia Santoro
Mona Bailey, local wunderkind, handled Santoro of the storied Danaher Death Squad more than ably, scoring 11 points in regulation.
Kids’ Grapple Royale
The Kids’ Grapple Royale was one of the highlights of the night. The whole place was cheering as nine kids set foot on the mat until eventually one was left – one who managed to submit and eliminate about 4 of the others in total dominating fashion. Keep an eye out for one Zane Mangan.

Charity Match: Gordon Ryan vs Brian Marvin
The ten-minute flow-roll / sub-only match raised at least $10,000 for the We Defy Foundation. Kudos to everyone involved!
The brawl
In the superfight between Victor Seabra and Dakota Hope, some rough play on both parts escalated and resulted into a heated exchange involving both competitors and their corners. (video)

Statement from Third Coast Grappling:
“After reviewing everything that transpired last night we have settled on a decision regarding the extremely embarrassing tussle that broke out during the Victor Seabra and Dakota Hope match.
While we personally are big fans of both guys we believe there was fault on both sides. Moving forward this sort of behavior will result in an indefinite suspension from our events.
Effective immediately Dakota Hope is suspended until January 2021.
Victor Seabra is also suspended until October of 2020.
With the lack of sanctioning bodys in BJJ we are left to decide the punishments and standards we set for our athletes when something like this happens. With this being the first time, it allows us to get an official personal conduct policy in place TBA soon. Now that expectations are set there can be no complaining when you catch a lifetime ban for acting crazy. We have to do better.
This was a stain on an otherwise stellar evening and a big reason why our events usually are 18+. The worst part was the example set for the kids. We all as martial artists should always be the example but even moreso when kids are around or involved.
We consider this matter final.
Thank you.”