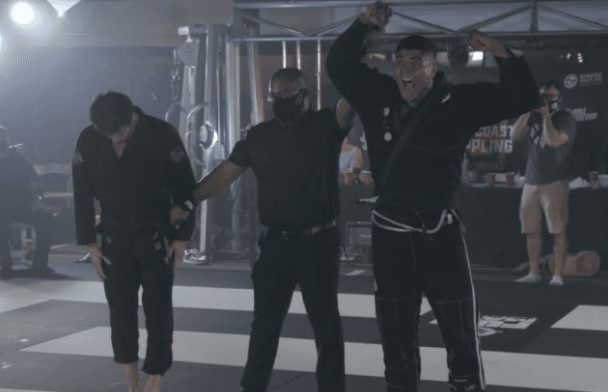 Just because the Kumite series is winding down does not mean that Third Coast Grappling (3CG) is also winding down. Kumite VI included a stacked card that featured two-Kumite champion Roberto Jimenez, Kumite II champion Victor Hugo and Fellipe Andrew on a new and bigger mat area. They are frequent flyers on the 3CG mats. Aside from the Kumite, the main event featured Osvaldo “Queixinho” Moizinho against Johnny Tama. ATOS teammates Lucas “Hulk” Barbosa and Gustavo Batista may have pulled out, but the action continued and there was plenty of it.

Maidana pulled guard and ended up in a lasso grip/”gun position” while Hugo deftly navigated and defended. After three minutes, with Hugo still on top and inside Maidana’s half-guard lockdown, Hugo managed to get mount. Hugo made quick work of Maidana, winning via Ezekiel choke with 90 seconds left in regulation.

Another match with a glaring size difference, De Melo versus Andrew was a technical match. De Melo managed to sweep Andrew when he went into the matrix guard briefly, getting the first two points. Then it was Andrew’s turn to try to sweep, which he eventually managed to do from the lasso guard, getting his own two points. He then deftly pressure-passed his way to cross-face then mount, from where he won by an arm triangle choke.

Almeida chose to pull guard to start the action, getting into the reverse De la Riva guard. Trovo attempted a flying triangle as soon as he got out of the guard. Almeida defended well and switched to a lapel guard, controlling Trovo’s right leg. They ended up in 50-50 position, from which Trovo twice attempted a straight ankle lock. Almeida defended well, then managed to disentangle himself, ending up inside Trovo’s closed guard and lasso guard. Trovo attempted a multiple attack chain that consisted of an omoplata, triangle choke, a toehold (briefly) and an arm bar. Almeida defended and Trovo was visibly winded as time ran out. In the overtime round, Almeida chose to be on the bottom, with Trovo inside of his closed guard. Aleida won by golden points from an omoplata sweep.

Jimenez won two Kumites, both No Gi events, but this one is in the gi. He was the early aggressor from within his guard. Jimenez scored a Renzo Gracie takedown, then worked his way into securing a back mount. Soon after, he secured a lapel choke from the back.

Andrew pulled guard and the pair spent almost two minutes in a stalemate with firm grips in each other’s pant cuffs. Andrew swept Hugo, but the latter managed a reversal. They were tIed 2-2 heading into overtime. Hugo had the legendary Rafael Lovato in his corner, fresh from his own match in Fight 2 Win the night before in Dallas. No points were scored in the overtime round. Victor Hugo won by unanimous referees’ decision.

Jimenez was the early aggressor and jumped guard, went for a little crab ride, then immediately attacked Almeida’s leg for the tap. All within 45 seconds.

As predicted by numerous analysts and outlets, the finals was between fellow Kumite champions Hugo and Jimenez. This was their first time facing each other and the size difference was obvious. Jimenez initiated a shot for a double-leg takedown, and when it was stuffed, switched to pulling guard. He attempted a kneebar from the matrix, and when it was defended, tried to go for a sweep that almost worked. Hugo went for a guillotine, but Jimenez ably defended and escaped, ending on top and inside Hugo’s closed guard. As Jimenez started to stand, Hugo went for an arm bar. In the resulting scramble, the two ended up in a leg entanglement, with Jimenez applying a toehold. The duo were stuck in 50/50 until Hugo went for a toehold that secured the win as well as his second Kumite championship and check.

In a match that can only be described as very technical, Queixinho defeated Tama in a unanimous referees’ decision. The score was dead even at 0-0 in regulation and overtime. Neither competitor able to establish control after sweeping or reversing, nor were they able to submit the other despite several submission attempts by Queixinho and pass attempts by Tama.