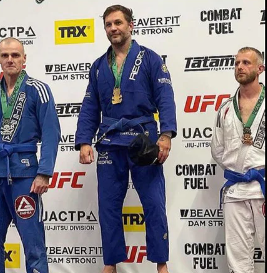 On August 20th there was a prestigious tournament held by REORG based in Wolverhampton, UK, and hollywood movie star Tom Hardy not only competed, but he won his weight category in both the Gi and No-Gi, scoring himself two gold medals. The British actor is known for his role in popular films and TV shows such as: Venum, Peaky Blinders, Legend, Bronson, and, Warrior to name a few. Hardy is one of the ambassadors of REORG, so to win his bracket at their tournament must have been a real great moment.

The competition was staged by charity REORG – who provide jiu-jitsu training for “disabled combat veterans in the UK suffering from either serious injuries or post-traumatic stress disorder”. REORG help support those ex-forces and current servicemen and women as well as those in the public services in jiu jitsu whether that be memberships, clothes, or by joining the strong REORG community that they have created. Read more about REORG here.

The 44-year-old actor was competing at the REORG Open Jiu-jitsu Championship at Aldersley Leisure Village. Hardy, who is a big combat sports fan, trained in MMA for the 2011 film Warrior and has experience of fighting in several of his roles.

It is rare to even hear of celebrities actively rolling, let alone competing, so it is really refreshing to see. Hardy isn’t completely alone in competing of course, as fellow actor Mario Lopez has also frequented his local competition. Coincidentally, not only are Tom Hardy and Mario Lopez both blue belts in BJJ but they are also 44 and 48, putting them in the same age division as well… imagine seeing these two battle it out. (Unlikely, but it sure would be great for the BJJ community!)