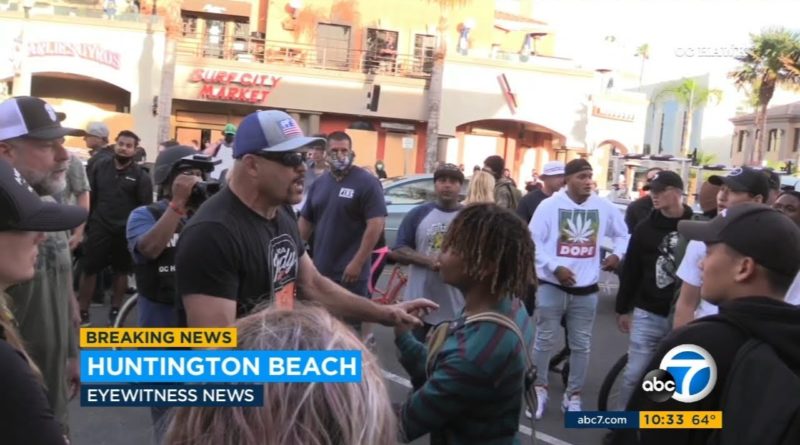 Two of the greatest UFC Light-Heavyweight champions of all time, Jon Jones and Chuck Liddell have been spotted intervening in riots related to the murder of George Floyd.

Jon Jones captures himself confiscating cans of spray paint off presumed protesters on the street of his hometown Albuquerque, New Mexico. He jumped to Instagram to report the matter, and to ask why the people are destroying the city stating, “As a young black man trust me I’m frustrated as well but this is not the way, we are starting to make a bad situation worse. If you really got love for your city (505), protect your sh*t.”

After the death of George Floyd, an African-American man who died last week after a white Minneapolis police officer pinned him down to the ground with his knee to his neck for nearly nine minutes, has sparked protests in cities across the U.S., many of which have led to riot and looting, and not every city has UFC Champions willing to help.

Jones managed to confiscate the cans of spraypaint and send the youngsters off, preventing any further property damage. They complied without minimal hesitation, handing over the spraypaint, and dispersed without complaint. I think myself (and most other people) would do so to if Jon Jones approached me and I was in their position!

According to MMAJunkie, Jones’ actions come as he’s currently in a public feud with UFC president Dana White after being denied a pay increase for a potential superfight with heavyweight contender Francis Ngannou. That has led Jones to announce he’s relinquishing his 205-pound title, though it remains to be seen how the UFC responds.

Enraged about the cities destruction and vandalism, Jones questions if the people’s motives are surrounding the Black Lives Matter Movement or if they have their own agendas. This is a far cry from the usual type of news about Jon Jones, and is resoundingly positive for a change.

“Is this sh*t even about George Floyd anymore?!?” he wrote in a caption with his Instagram video. “Why the fc*k are you punk ass teenagers destroying our cities!?? As a young black man trust me I’m frustrated as well but this is not the way, we are starting to make a bad situation worse. If you really got love for your city (505), protect your sh*t. All you old heads need to speak up, call your young family members and tell them to come home tonight.”

The second of these UFC Champions, Chuck Liddell, went to Huntington Beach to break up fights during what started as a peaceful protest, but was showing signs of turning into riots. He stated his intention was to go down there to talk to people who were defending their businesses and protesting peacefully. He went down there to talk to people who are feeling angry and try to prevent temperatures from flaring.

Liddell says on ABC7, “It’s good to see people defending their city, and it’s terrible. Violence begets violence. Violence doesn’t help anybody. We all know that what happened was wrong. Everybody I know thinks it was wrong, it’s hard to watch. But this is not happening, destroying cities, destroying people, hurting people. Does not do any good for anybody. Hey, protest all you want, just do it peacefully.”

Lucy Wynne has 79 posts and counting. See all posts by Lucy Wynne