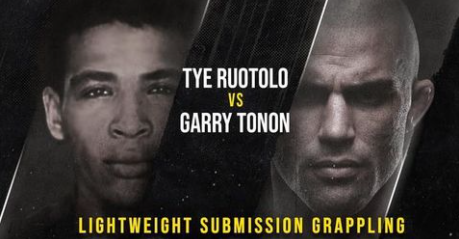 ONE Championships has been building its staple of submission grapplers, with top competitors like Danielle Kelly and Andre Galvao recently making their debuts in the promotion. Tonon has previously competed in submission grappling at ONE, defeating Aoki in 2017.

ONE Championship matches are submission-only. In the event no submission occurs, the match is declared a draw.

The Ruotolo brothers are not only two of the most entertaining competitors in jiu-jitsu, they are also two of its best. Kade Ruotolo was named Grappling Insider’s 2021 no-gi grappler of the year after capturing the Who’s Number One (WNO) title and collecting wins over the likes of Ethan Crelinsten, William Tackett, and Keith Krikorian.

Although Garry Tonon may have shifted his focus to his MMA career in recent years, he is still an elite grappling competitor. He is a multiple-time EBI champion and has seen the podium of the ADCC World Championships twice. In MMA, Tonon lost his most recent fight — a title shot against Thanh Le.

Aoki is best known for his accomplishments in MMA, but he has achieved most of those accomplishment by way of his unique grappling and submission abilities. Across 47 career victories, 30 have come by way of submission. Aoki is also a 2005 ADCC veteran.

Ben Coate has 839 posts and counting. See all posts by Ben Coate