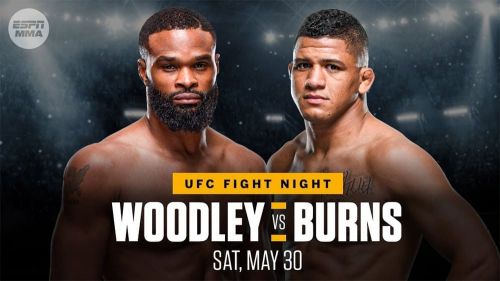 The upcoming Tyron Woodley v Gilbert Burns matchup set to headline UFC Fight Night 176 is a grappler’s dream fight. A high level wrestler faces a world champion Jiu-Jitsu player. HALLELUJAH!! However, it is said the grappling gods have a peculiar sense of humor because there is a good chance we will never see them take it to the ground. Instead, it will likely be a stand up battle with Burns attempting to apply forward pressure and Woodley countering with his brutal right hand.

That isn’t to say there won’t be a lot a grappler can learn from the fight. Woodley will undoubtedly use his excellent defensive wrestling skills to counter Burns’ takedown attempts. It may be a long, frustrating night for Burns if the Woodley vs Maia fight is any indication. We all remember how easily Woodley shut down Demian Maia’s takedown game (He went 0 for 24 that night). Though Maia had dedicated countless hours to improve his wrestling a wise philosopher once said: “There’s levels to this sh*t bro!” Indeed.

Though Burns is a great grappler (watch Burns vs Tonon on YouTube if you want to see grappling at its finest) he is not a high level wrestler.  It would be safe to say Maia has a more technical wrestler than Burns and even Maia’s takedown game was utterly useless against Woodley. Gotta go with Woodley in this first key battle.

The second key battleground will be striking. In recent years Woodley has outstruck some of the best strikers in the game. Robbie Lawler? goodnight. Stephen “Wonder Boy” Thompson? fought to a draw in their first fight and Woodley won a decision in the second matchup. Darren Till? Woodley nearly knocked him out with a vicious right hand and soon finished the dazed and confused Till with a D’Arce choke. Burns has fought no one even approaching the level of strikers Woodley has, and his only recent knockout victory was over their common opponent, Demian Maia. To top it off Burns has a habit of wading in with his chin held high. Burns’ chin may prove to be an easy target for Woodley’s right hand unless that habit has been corrected.

The one area Burns may have an advantage over Woodley is motivation. Burns is a hungry, up and coming contender who recently had the biggest win of his career with his knockout of Maia. Momentum is real and can carry one over difficult obstacles. On the other hand, Woodley is a 38 year old ex UFC champ whose inner flame might not be burning with the same intensity it once did. Though fun, a rap career doesn’t help much once those octagon doors clang shut.