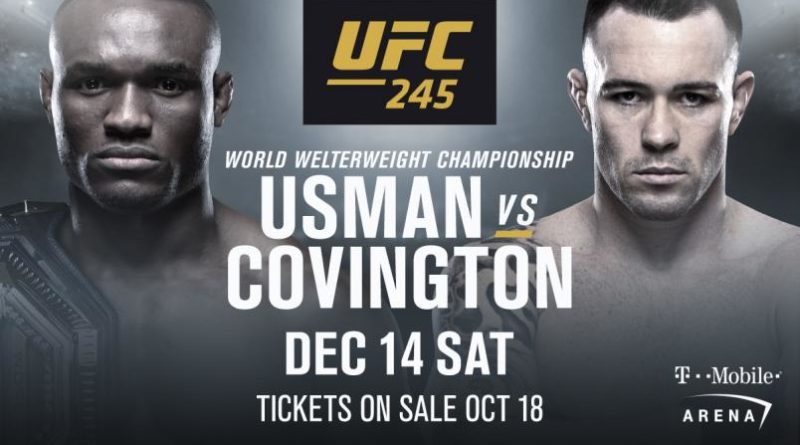 The UFC’s welterweight division has a history of being dominated by outstanding wrestlers. From Matt Hughes to George St. Pierre and Johny Hendricks to Tyron Woodley, the division has been home to some of the greatest wrestlers to set foot in the Octagon. This Saturday at UFC 245, two remarkable wrestlers will once again throw down to determine who the baddest man in the division is.

Headlining the main event at UFC 245, Welterweight Champion Kamaru Usman puts the title on the line when he takes on enfant terrible, Colby Covington. This matchup is long overdue and eagerly awaited. It seems that these two fighters were destined to collide and there certainly isn’t any love lost between them.

This Saturday it is Kamaru Usman who is the bookmaker’s favourite, but that certainly doesn’t mean that it is done deal. Usman hasn’t defended the title since he won it against Woodley back in March at UFC 235, whereas Covington showed extraordinary form in his latest fight against Robbie Lawler.

The Clash of Two Wrestle-Boxers

On paper the two look remarkably similar. Both fighters share the wrestle-box style, clinching and grinding the life out of opponents. They both entered the UFC with impressive wrestling accolades, Covington having been a NCAA Division I and two-time Pac-10 Conference champion in college, while The Nigerian Nightmare was NCAA Division II national champion.

In his last showing, Usman managed to take former NCAA Division I All-American wrestler Woodley down multiple times. Despite the fact that Usman is an amazing grappler, submissions have generally eluded his UFC wins. In fact he has only managed to pull off one submission in his career, an arm-triangle against Hayder Hassan back in 2015 on The Ultimate Fighter. Colby Covington on the other hand has had 4 submission wins in his career. However, both fighters have had the majority of their wins come by decision.

The determining factor in this matchup may be Usman’s takedown defence, which is currently a 100%. Despite having fought the likes of Tyron Woodley and Demian Maia, Usman has not been taken down in the octagon as of yet. While Covington also sports an impressive 78% in takedown defence, this may be the very thing that give Usman that little edge he needs in order to retain the belt.

In addition to the Usman vs. Covington title bout, the UFC 245 card has two additional title matches as Max Holloway defends against the up-and-coming Alexander Volkanovski and Amanda Nunes takes on Germaine De Randamie. This comes at the end of a stream of match-ups featuring former title holders and up comers.