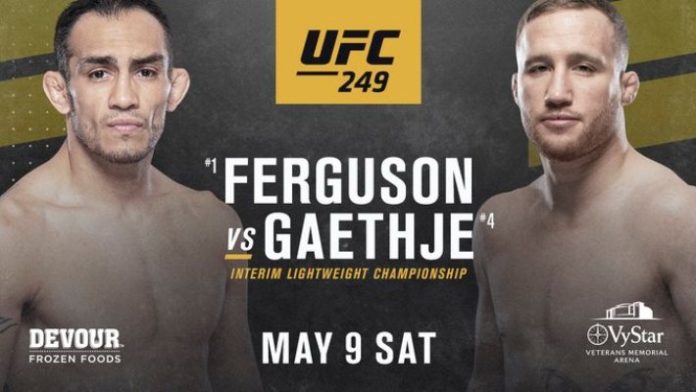 After weeks of painful uncertainty for all fight fans around the world, UFC 249 has taken shape in record time after the event was booked for Florida on May 9th just a few days ago and already the full card has been announced. Originally, the card was set to feature the most long-awaited match in MMA history between Khabib Nurmagomedov and Tony Ferguson but sadly the MMA god’s least favorite pairing was cancelled for a record fifth time as Nurmagomedov was unable to leave Russia.

Dana White did absolutely everything in his power to make this fight happen, even going so far as to keep the originally scheduled event on the books even though all three events prior to that were cancelled due to the Coronavirus outbreak. When the event was eventually postponed to it’s current placement on May 9th, Justin Gaethje was quick to step in to replace Nurmagomedov and claim his opportunity for a shot at UFC gold by fighting Ferguson for the Interim Lightweight Championship (a title Ferguson won against Kevin Lee and only lost due to injury, not in the octagon).

A blockbuster Co-Main event was then set up which sees Henry Cejudo defend his Bantamweight title against the king of the comeback and one of the most insightful parts of the UFC’s broadcast team, Dominick Cruz. The main card also features two Heavyweight fights all but guaranteed to produce fireworks, the first sees the return of Greg Hardy as he gets yet another big promotional push, fighting on the main card against undefeated Yorgan De Castro. Shortly after that, Jairzinho Rozenstruik comes in off his destruction of Alistair Overeem and straight into a match with one of the heaviest hitters on the planet, Francis Ngannou.

Shortly before all this, fans will get led into the main card by Anthony Pettis and Donald Cerrone facing off in a spectacular matchup after a stacked preliminary card featuring Fabricio Werdum, Ronaldo “Jacare” Souza, Carla Espara and Aleksei Oleinik.

Or to purchase UFC FightPass to watch the live prelims, click here.