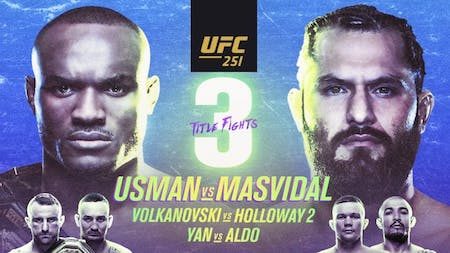 UFC 251 is the first of at least four of the now-legendary Fight Island events that the promotion is putting on over a two week period this month. Dana White and Co have built up towards these events with almost picture-perfect promotional ability by first teasing the possibility of a “Fight Island”, before slowly making that dream a reality. It’s only been the last few weeks that the first peek at what the events will actually look like have really surfaced and every small drip of information has sent fans into overdrive, hyping up these events even further. Although, with three title fights on top of an amazing card, it’s not as if UFC 251 actually needed any help in this department.

The BMF And The Nigerian Nightmare

Kamaru Usman will make his second title defense against the recent winner of the BMF title, Jorge Masvidal. The fight was originally intended to give elite BJJ black belt, Gilbert Burns, his first shot at UFC gold until he tested positive for Coronavirus at the 11th hour and was quickly replaced by Masvidal, who stepped in on incredibly short notice for such an important fight in his career. The matchup itself is an interesting one as Usman has always been a fantastic wrestler and pressure-fighter, but the recent addition of elite coach Trevor Wittman could give him a whole new level in his striking ability and he could prove to be the man that makes the difference, much like he did for Justin Gaethje at UFC 249.

Masvidal on the other hand is much more of a known quantity in MMA after nearly fifty fights in the sport. On paper, it might seem like Masvidal is overmatched and Usman should win round after round with dominant wrestling but then again, that’s what people thought Ben Askren would do too until Masvidal flying kneed him into oblivion. Another interesting development is that Masvidal has been working on his wrestling with one of the best around right now, Bo Nickal, in the lead up to this fight and this is almost guaranteed to have given him a huge boost.

Another spanner was thrown in the works just a few days before the fight as American Top Team head coach Mike Brown tested positive for Coronavirus and is now unable to corner Masvidal on the night. With all things considered, the fight should be a very close affair but the presence of an elite striking coach in Usman’s corner, coupled with the lack of an elite head coach in Masvidal’s corner, may prove to be what allows Usman to make late adjustments and win the fight on the scorecards.