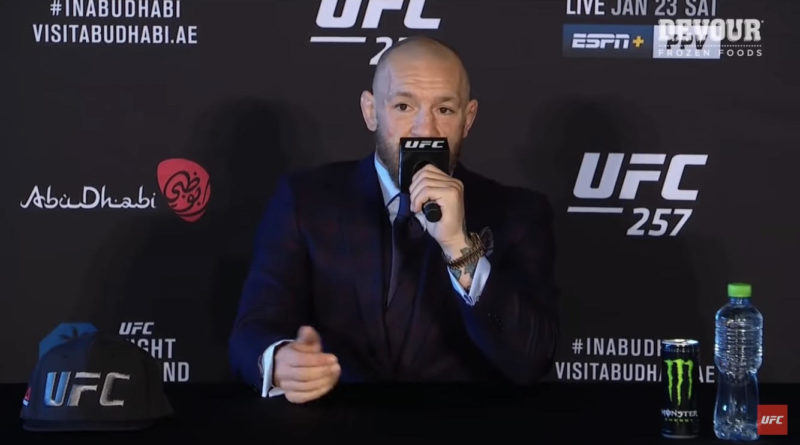 UFC 257 was a blockbuster event. In the main event, Dustin Poirier avenged a 2014 loss to Conor McGregor, defeating him by TKO midway through the second round. And in the night’s co-main event, Michael Chandler had a spectacular UFC debut, knocking out Dan Hooker in the first round. What’s next for McGregor, Poirier, Chandler, and the rest of the players in the UFC’s stacked lightweight division?

First, despite his best efforts, UFC president Dana White seems ready to accept the fact that Khabib Nurmagomedov will likely remain retired. Although he is still officially the UFC lightweight champion, Nurmagomedov has shown no real interest in returning the Octagon, and that didn’t change after UFC 257.

“I did talk to Khabib and he said to me ‘Dana be honest with yourself. I’m so many levels above these guys. I beat these guys.’ I don’t know, but it doesn’t sound very positive,” White said in a post-fight press conference. “He’s basically retired, I’m the one that’s been trying to get him to do one more.”

White did, indicate, however, that a match-up between Poirier and Chandler makes sense, and it makes sense for the pair to fight for the vacant UFC lightweight title.

If Poirier and Chandler are matched together, where does that leave McGregor? Despite the loss at UFC 257, McGregor will likely angle for a trilogy fight with Poirier, even if Poirier loses to Chandler. That is simply one of the biggest fights to made in MMA, and it’s one that would do big money whether a belt is on the line or not. McGregor agrees that a third fight with Poirier makes sense.

“Me and Dustin is one and one. For sure we’ll go again,” McGregor said during the post-fight press conference.

If the UFC doesn’t want to book a rubber match between McGregor and Poirier, McGregor has a few other options. If he wants to continue to vie for the lightweight title, McGregor could square off with Charles Oliveira, who is riding an eight-fight win streak and arguably the most dangerous contender in the division. He may also pursue a fight with action fighter Justin Gaethje, who was the last challenger to Nurmagomedov’s title.

Outside of the current crop of lightweight contenders, there is one more interesting fight for McGregor: a third fight with rival Nate Diaz. Diaz initially defeated McGregor on short notice in 2016 but lost the rematch by unanimous decision five months later. Recently, White teased a Diaz return to the Octagon, specifically noting that he’ll be competing at lightweight. Outside of a rubber match with Poirier, one with Diaz is likely the next biggest fight available for McGregor.