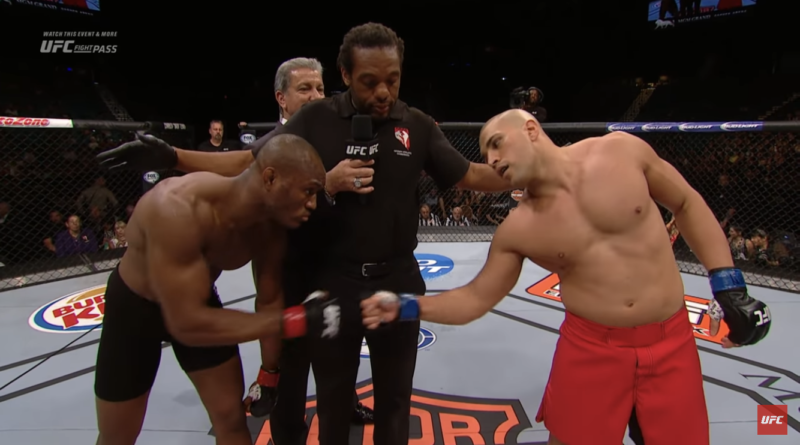 On Saturday, UFC welterweight champion Kamaru Usman will defend his title against Gilbert Burns in the main event of UFC 258. The match-up has been long anticipated, as it was initially scheduled for the summer of 2020.

In preparation for UFC 258, the UFC has released for free Usman’s dominating Octagon debut against Hayder Hassan. Watch the future champ’s performance below.

Usman’s fight against Hassan took place in 2015 at The Ultimate Fighter Season 21 Finale. As a cast member of TUF 21, Usman fought his way to the finals by defeating Mike Graves and Steve Carl.

Usman’s Octagon debut gives fans more than just a hint of Usman’s world-class potential. He is a phenomenal athlete with beautiful chain wrestling and stifling top control. Against Hassan, we see Usman go to the same playbook that he has used to capture and defend the UFC welterweight title: push his opponent against the cage, take him down, and hunt a finish on the mat.

At UFC 258, Usman’s wrestling will be tested against Burns’ world-class jiu-jitsu. An IBJJF world gi and no-gi champion, Burns is one of the most dangerous and accomplished submission experts in the UFC, but has rounded out his MMA game with true knockout punching power. He comes into this fight riding a six-fight win streak.

UFC 258 takes place on Saturday, February 13 and will air live on pay-per-view through ESPN+.