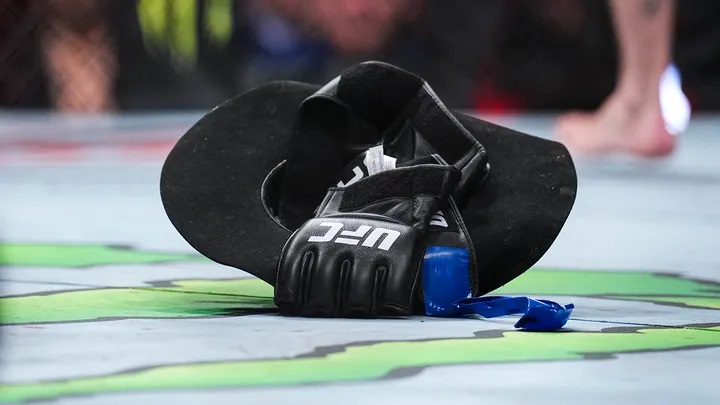 Donald ‘Cowboy’ Cerrone is one of the most loved and exciting fighters in the UFC, but after six out of seven of his most recent fights being losses, he has decided to hang his gloves.

On Saturday night, Cerrone fought against Jim Miller in a rematch of a fight he won all the way back in 2014, but he wasn’t able to get the upper-hand this time, and ended up being submitted by Miller 1:32 in the second round. The 39-year-old was caught with a head kick and slipped, leading to Miller pouncing at the opportunity to lock up a guillotine choke whilst trapping Cerrone’s arm and get the tap. It came as a shock to fans all across the world, because BJJ black belt Cerrone is usually on the other end of opportunistic submissions and is known for his high-level jiu jitsu skills.

“I’m going to be a movie star”

After the result was made official by announcer Bruce Buffer, the UFC legend then left both of his gloves and cowboy hat in the octagon after the fight, following his announcement of his retirement from professional MMA.

Cerrone has been acting since at least 2017, and is set to star alongside Gina Carano in an upcoming film ‘Terror on the Prairie’.

The Legend of Cowboy Cerrone

Cowboy had an incredible career in the sport, spanning over 16 years and 55 fights. Previously Cerrone shared the record for most wins in the UFC (23) with his opponent Miller, now Miller has beaten Cerrone, he has the current record (24). 17 of Cerrone’s victories came from submission, and he has also won 18 “Fight of the Night” bonuses, tied with Charles Oliveira for the most all time, he has lived a fruitful career as a MMA fighter.

His retirement comes as six of his last seven bouts were losses. He has previously expressed to fans that fighting has become difficult and he has endured “off-nights” — an honesty that was well-received by his fans.

Donald ‘Cowboy’ Cerrone wasn’t the only fighter to announce the end to their professional MMA career at UFC 276 though, as Jessica Eye also announced her retirement after losing to Maycee Barber earlier in the night.

Lucy Wynne has 134 posts and counting. See all posts by Lucy Wynne