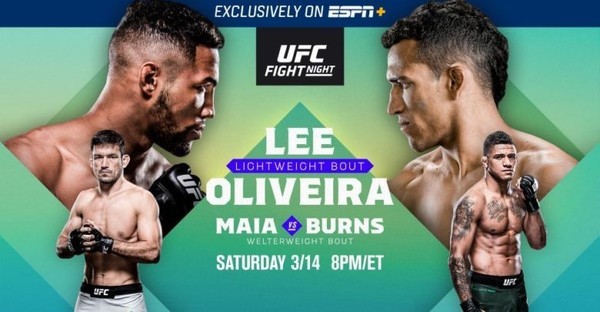 UFC Brasilia took place in a closed venue with nobody in the crowd thanks to recent fears over Coronavirus but the main event still gave us a new UFC record, full results for the event are at the end.

The Main and Co-Main event were predicted to show high-level submission grappling to the masses but the first of the two fights went in the complete opposite direction. Despite Demian Maia and Gilbert Burns both being black belts in BJJ and probably the best grapplers in the Middleweight Division, Burns got the win via an emphatic knockout in the first round. Given that the 42-year old is not getting any younger and he’s openly talked about retiring at some point in 2020, maybe the time is right now for Maia to hang up his gloves and return to the Masters Division for a few more gold medals.

The main event delivered in style however as Charles Oliveira extended his UFC record for most submission finishes to a stunning fourteen by getting the tap in the third of five rounds against Kevin Lee. There was a little controversy surrounding the finish however as Lee appeared to dispute whether or not he actually tapped to the choke but both broadcasters and viewers at home with the benefit of instant replay could see that the tap was pretty clear and the referee made the correct decision.

Lee’s frustrations are no doubt down to his difficult run as of late as the young fighter seemed poised to take down the world back in 2017 when he was about to go up against Tony Ferguson for an Interim Lightweight World Championship after a five fight win-streak. Since losing the fight with Ferguson, Lee has fought five more times including last night, going 2-3 across two different weight-classes and missed the Lightweight weight-limit twice. At 27, he’s nowhere near finished but the pressure is mounting for the Motown Phenom to start putting some wins together and get back to his old form if he wants to find himself in another title fight before the age of 30.

After the fight, Oliveira took his chance and although it felt weird without a crowd reaction, he did the right thing by calling out the winner of Khabib Nurmagomedov and Tony Ferguson’s upcoming clash. This win put him on a six fight win-streak where he’s finished all of his opponents and with his incredible BJJ skills, he presents an interesting stylistic challenge for the reigning Champion if he can get past Ferguson and if not, Ferguson’s frenetic 10th Planet-style could provide some interesting grappling moments as well.

Despite the great fights at the top of the card, the rest was relatively lacklustre. All but three of the twelve fights on the card ended in Decisions and the broadcast actually benefited from the absence of a crowd as we would no doubt have heard deafening boos or echos of Ric Flair at multiple points in the night. Unusually, Rani Yahya fought Enrique Barzola to a Draw on the preliminary card in a fight that looked like the No Gi Masters World Champion really could’ve won on paper.