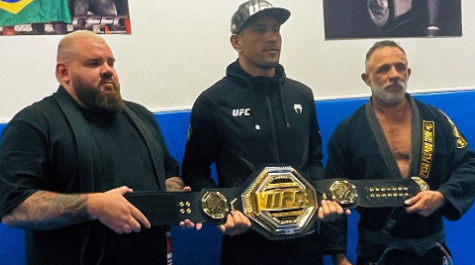 Just days removed from his title-winning victory over Israel Adesanya at UFC 281, Alex Pereira has leveled up in Brazilian jiu-jitsu.

On Wednesday, one of Pereira’s coaches, BJJ black belt Plinio Cruz, posted to Instagram awarded the new champion the rank of brown belt.

Watch video of the promotion below.

A longtime kickboxer with over 30 professional victories, Pereira is most known for his world-class striking and not so much for his ground game. Across his eight professional MMA bouts, he has won six by knockout and his lone loss came by way of submission.

Still, Pereira has shown a certain level of grappling awareness and defense in his recent outings, including his main event win at UFC 281. In that fight, Pereira struggled in the brief ground exchanges he had with Adesanya, but nonetheless survived, winning by knockout in the final frame.

Cruz explained the logic behind Pereira’s promotion to brown belt:

“The main part of jiu-jitsu is not about submitting. It’s not about winning. It’s about surviving, and under the most hard circumstances, he used jiu-jitsu to survive… That takes a very high-level guy in the head, the heart, and the technique.”

Undefeated in the UFC, the Brazilian now owns three victories over Adesanya – two in kickboxing and one in MMA.

As the new UFC middleweight champion, Pereira can look ahead to a host of challengers that will try to test his jiu-jitsu, including former champion Robert Whittaker and former title challengers Jared Cannonier and Marvin Vettori, among others.