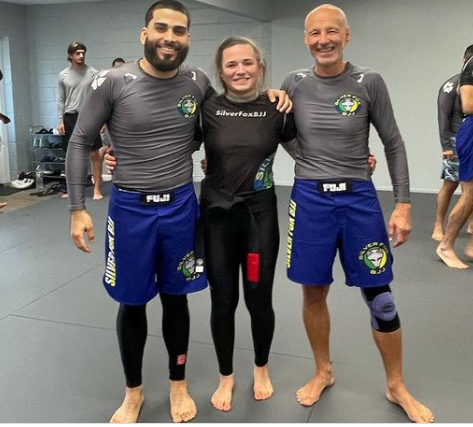 Fighting prodigy and MMA prospect Erin Blanchfield has been promoted to BJJ Black Belt by coach Karel “SIlver Fox” Pravec. Blanchfield was just 18 years old when she earned a championship title at EBI 12 as a purple belt back in 2017, on the strength of wins over Livia Gluchowska, Katherine Shen, Lila Smadja, and accomplished competitor Gabi McComb in the finals: so her black belt is very well-deserved.

Following her success at EBI 12, Blanchfield has gone on to have a successful MMA career. She started out under Invicta, where she went 6-1 and had a title shot scheduled against Pearl Gonzalez. Though the fight was unfortunately cancelled after Gonzalez tested positive for COVID-19, Blanchfield’s career moved forward as she signed with the UFC.

Her first fight for the promotion was supposed to happen against Norma Dumont on April 10 but the bout was scrapped when Dumont missed weight, so Blanchfield will now be taking on Sarah Alpar at UFC 266 on 4th September. Sarah Alpar, is a one-time UFC veteran with a 9-5 professional record. She lost her UFC debut by TKO against Jessica-Rose Clark in September 2020.

Congratulations on the black belt and best of luck in the Octagon! #OneToWatch