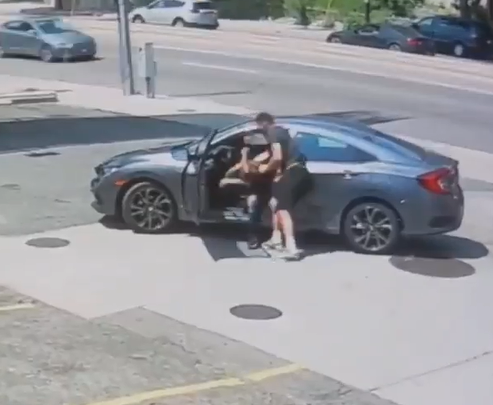 UFC Fighter Jordan Williams left his car running at a gas station in Colorado as he went inside to buy a drink and snacks, but as he returned to his car he saw that a man had jumped inside and attempted to drive off. Jordan Williams, 30, wasn’t going to allow that to happen, so he ran up to his car as the thief tried to get away and opened the door, leading to the thief being thrown out of the car and deciding to run away.

“At first I couldn’t really believe it. And then I was like, ‘Holy s***, there’s someone really in my car,’ he told ESPN.

“I opened the door and, it’s funny, the first thing I did was throw the stuff I bought on the passenger seat, and then I proceeded to punch the guy. After the first punch he said, ‘OK, I’m sorry, I’m sorry.’ I was able to get some knees on him, as he was exiting out.”

Mr Williams, who posted security video footage of the incident on his social media, says he regularly used the Denver gas station on his way from home to the gym he trains at.

Williams also shared footage of the attempted carjacking on Instagram later that day. “So someone tried to steal my car today,” he wrote in the caption. “If you are wondering why my car was still on it’s the same reason why he couldn’t drive away. I have a push to start and my car won’t go unless the keys are within 5 ft of it and I have them on me always. Needless to say my lesson was learned and I hope so was his.”

Williams says he could have made things even more violent … writing on his social media page, “Wish I would of hit him with the trip after the clinch work when I tossed him out of the whip and finish off with some ground and pound.”

Both parties definitely learnt a lesson in this instance: don’t hijack cars, and don’t leave your car doors open wherever you are, or whatever car you have.