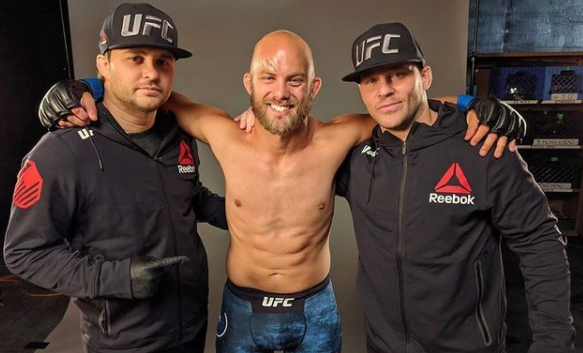 The featherweight fighter Justin Jaynes is giving new, literal meaning to the phrase “put your money where your mouth is.” In a recent interview with Overtime Heroics, Jaynes shared that he plans to wage his entire fight purse from his UFC Vegas 30 bout with Charles Rosa — close to $25,000 — on himself. The fight goes down on Saturday, June 26, live from Las Vegas.

Jaynes is currently on a three-fight losing skid, and he recognizes his UFC career is on the line this weekend. The added pressure hasn’t made Jaynes any less confident. Quite the opposite, even with his back against the wall, Jaynes is more confident than ever.

Speaking with Danny Podolksy, Jaynes explained why he’s betting his purse on himself.

“As soon as the betting line comes out between Justin Jaynes and Charles Rosa, I’m putting my entire fight contract on myself, and my coaches are doing that as well,” Jaynes said. “I’m betting close to 25K that I’m winning my fight because that’s how much I believe in myself. This is all in for me, and if I lose this fight, I do not get paid and my coaches do not get paid either. And that won’t be as bad as losing my job of being in the UFC.”

Justin Jaynes debuted in the UFC in 2020 with a spectacular first-round knockout of Frank Camacho. Since then, he has struggled in three consecutive losses, all by way of stoppage. Rosa is coming off a loss of his own, and has alternated wins and losses since joining the UFC in 2014.

Will Jaynes’ big gamble pay off? We’ll see on Saturday, but his fight with Charles Rosa suddenly became much more interesting.

How to watch: UFC Vegas 30 takes place on Saturday, June 26, and will air live on ESPN+ (subscription required) beginning at 1:00 PM EST.