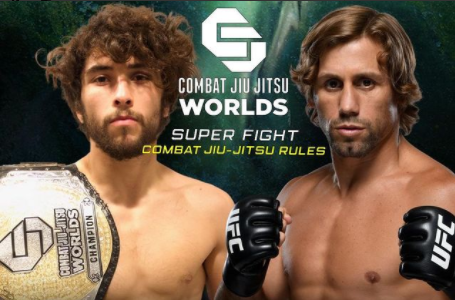 The Combat Jiu-Jitsu (CJJ) Worlds go down on Sunday, December 19, and the card just received a major boost in star power. Adding to a line-up that includes MMA fan-favorite Donald “Cowboy” Cerrone and former UFC champion Rashad Evans, former WEC champion and UFC hall of famer Urijah Faber is now set to compete on the card.

Faber will be taking on current CJJ bantamweight champion Elias Anderson. It will be Faber’s CJJ debut.

Hailing from Sacramento, the “California Kid” Faber is often credited as being one of the first lighter-weight fighters to become a true fan favorite. Faber’s aggressive, wrestling-based strategy earned him fans and the WEC featherweight title in 2006. He would lose that title in 2008, but continued to compete at the highest levels of MMA, challenging for UFC titles on multiple occasions. Faber’s last fight was a 2019 knockout loss to current UFC bantamweight champion Petr Yan.

Although this will be Faber’s first foray into CJJ, he has competed in submission grappling before, with losses to elite competitors Paulo Miyao and Nicky Ryan.

Anderson is the more seasoned no-gi grappling competitor, and is the much more experienced CJJ fighter. He captured the CJJ bantamweight title in March 2021, defeating Richard Alarcon in the finals.

How to watch: The CJJ Worlds take place on Sunday, December 19, and will air live on UFC Fightpass (subscription required).