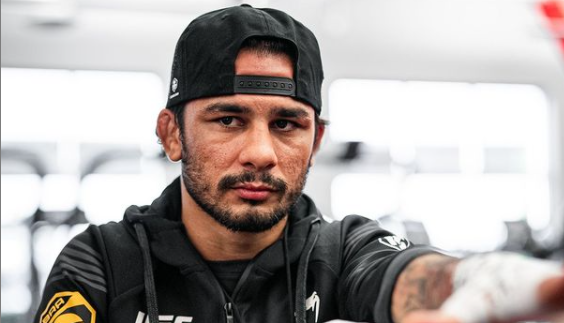 On Saturday at UFC on ESPN 29, a flyweight bout featuring top contenders Alexandre Pantoja and Brandon Royval carried big title implications, and Pantoja walked away the winner, having secured a shot at Brandon Moreno‘s UFC flyweight title with a second-round submission win over Royval. The win was arguably the best of Royval’s career, as he was able to finish one of the division’s most unique and aggressive fighters.

The first round between Pantoja and Royval was predictably fast-paced. Both fighters landed strikes on the feet, but much of the action took place on the mat, where Pantoja consistently hunted and even secured Royval’s back. For his part, Royval countered with a relatively deep leg lock attempt and seemingly endless energy to scramble.

In the second round, Pantoja found himself in a familiar position hunting Royval’s back. This time, though, Pantoja was able to completely secure the position and sink in the choke.

Immediately following the fight, Pantoja had a respectful message for the champion Moreno, a fighter he has beaten twice before (once on The Ultimate Fighter, and once in the UFC).

With the victory, Pantoja is now on a two-fight winning streak. Coming into this fight, he had beaten former Rizin champion Manel Kape, and before that, he dropped a decision to fellow flyweight contender Askar Askarov.