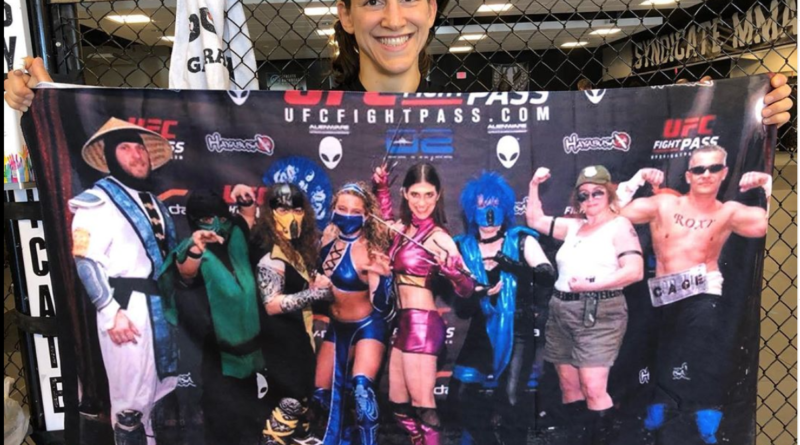 Roxanne Modafferi is the Ultimate Fighting Championship’s (UFC) #8 in the women’s flyweight division. She faces top prospect Danielle Kelly in the main event of Submission Hunter Pro 60. It is an all-female card stacked with some of Jiu Jitsu’s rising stars and most exciting grapplers. A portion of the proceeds will go to Breast Cancer Research through The Rose Houston — a non-profit organization whose mission is to “reduce deaths from breast cancer by providing access to screening, diagnostics and treatment services to any woman regardless of her ability to pay.”

Grappling Insider: Just to establish that history… how and why did you start training Jiu Jitsu?

Modafferi: I really wanted to do a martial art. I saw the Power Rangers, and I wanted to be strong and beat up the bad guys. I fell in love with the idea of martial arts, be righteous… I did Karate, Jiu Jitsu, and I got into Judo.

My Judo friends introduced me to Jiu Jitsu. I hurt my back and I couldn’t take the falls anymore, being flipped and also the twisting… so my (Judoka) friend said: “You know Jiu Jitsu is already on the ground, give it a try.” I was very resistant at first, but I finally succumbed and tried it.

GI: So how’s your back now?

Modafferi: Great. It plagued me for a decade, but my physical trainer, Lorenzo Pavlica, helped me strengthen a lot of areas, the glutes and the lower back and a lot of everything. So I just needed that strengthening from somebody who knew what he was doing. I’m great now, I feel great.

GI: How about MMA? How did you transition? What got you started?

Modafferi: When was the IBJJF made or founded? When I was… in year 2001 I was just doing Grappler’s Quests and NAGA. That was pretty much it. In Massachusetts and New Jersey, those were my only options, really. Then I moved to Japan for eight years and when I came back, everything evolved. I came back in 2013.

GI: How was the decision made, moving to Japan, studying Japanese?

Modafferi: I loved Japanese, the language, the way it sounded. I loved the martial arts culture of Japan. And anime so I decided I wanted to make that my second language and do something cool with it.

GI: Are you still fluent? Do you get to practice?

Modafferi: It’s really, really, really hard. I know that if you don’t use it, you lose it so I try to write a blog. I try to read my friends’ stuff on social media. I have like a phone date with one of my friends in Japan for half an hour every Sunday. I still feel like it’s slipping a little bit, but the more anime I watch, it refreshes my mind. And I go to Japan once a year for vacation, so I’ve managed to keep it up like, decent. It’s really hard, it takes effort but I studied it for four years in college so no way that’s gonna go to waste.

GI: A couple of years ago, you almost retired. I’m so happy you decided against it. The world needs more martial artists like you who, I think, really live and manifest the principles of martial arts.

GI: I love the banter between you and your opponent, Danielle Kelly. Do you actually know each other?

Modafferi: No, I don’t. I have no idea who she is. I just heard that she was really good. I told one of my coaches that I’m fighting Danielle Kelly. He’s like: “Oh I know her. She knows leg locks.” So I was like: “Oh right, well then teach me the ways!” I looked her up and she’s got a lot of stuff online. I always try to do something fun, I can’t really smack-talk, I never have any animosity. But I’m always looking for some way to promote the fight.

I was thinking about it, like for Andrea Lee, I did like a joke with a comedian, my friend Jamie Kilstein. (In it, I was trying to) talk smack and failing miserably because I can’t say mean things. I just got these rainbow unicorn spats from Meerkatsu, he’s kinda like my sponsor. Maybe I’ll taunt her with my new pretty spats so I did that video. Now she got into it too and I wonder if she’s had anybody smack-talk her before. She tagged me the other day: “Roxanne, coming at you with Chik-Fil-A #corny.” I’m pretty corny so that works. Bring it on girl, let’s go!”

GI: Without revealing details, do you have a game plan for this match? Do you actually game plan?

Modafferi: No, but I am now. One of my coaches got all excited and watched a bunch of videos. Guns, his name’s Gunderson, at the gym, he’s helping me prepare. My friend and former Jiu Jitsu coach Casey Milliken also, they’re helping me prepare. I’ve never had to research a Jiu Jitsu opponent, always MMA, so this is exciting. I’m really excited about this. MMA feels different than Jiu Jitsu, I feel like a nervous, excited for MMA, but like a happy, excited for Jiu Jitsu. It’s my favorite thing, I can’t wait.

GI: Before this, when was your last grappling superfight?

Modafferi: I was supposed to do Submission Underground in May or April and I ended up backing out because of COVID. Just a pandemic, no big deal. Before that, I fought in the IBJJF Masters Worlds in the Gi at brown belt and I won first place. That was in August, 2019, and then I got my black belt in February of this year.

GI: Congratulations, Professor. After this (SHP 60), are you planning to do more? I know your next fight in the UFC is in January.

Modafferi: I think I got approved for a Submission Underground bout in December. Stay tuned, we’re not sure, I think. My flight’s booked. I think you have to be out six weeks before you get another fight, legally under the rules of the UFC. That match is before six weeks. Just calculating the risks and all, but you only live once, so I’m probably just gonna do it. It’s exciting, I love Jiu Jitsu.

GI: Do you already have an opponent for that one?

GI: Aside from grappling superfights, what are your long-term plans? MMA-wise? Life? Starting a school?

Modafferi: Not start a school, that’s really hard. A lot of schools fail, I want to teach at somebody else’s school. Right now I’m really happy at Syndicate. I’m leading the kids’ Jiu Jitsu program, focusing on the little kids and Coach Rick is the head of the big kids’ program, so we’re co-running it. It’s so cool, thank you John Wood for giving me that position. I want to keep winning my MMA fights until I can’t fight anymore. I feel like I’m getting stronger. Thanks, Lorenzo, for the conditioning. I don’t know, we’ll see what happens.

GI: Are you going to dress up or something for the weigh-in and face-off?

Modafferi: (gets up and retrieves a stuffed unicorn) This is my mascot for this fight. I feel like I need to do something unicorn-y because that’s like the theme. I started that, right? I also have a unicorn shirt which I debuted today in a funny Instagram video. I wonder if I can get a mask… Maybe! I’m thinking though, I don’t know. Something like that.

GI: Anyone you want to thank or call out?

Modafferi: Yeah I think there’s a theme for this grappling event, like a breast cancer awareness theme, right? And some of the proceeds are donated… Do you know the details?

GI: The Rose Houston is a non-profit. They sponsor women who can’t afford mammograms and other medical procedures. (see more information below)

Modafferi: That’s awesome. I actually have a lot of breast cancer in my family so that’s an awesome cause. Thank you so much for doing that, whoever’s involved in organizing that. I’m very honored to be a part of it.

“Submission Hunter Pro is a submission grappling superfight series designed to showcase the rising stars of the BJJ world and the local grapplers in each city they visit. SHP was created by CEO/President Eric Garcia with a desire for all grapplers to have the opportunity to perform on the big stage in front of the world. Learn more at www.garciapromotions.com”

“Since its launch in 1986, The Rose has served nearly 500,000 patients and is now the leading nonprofit breast health care organization in southeast Texas. Their board-certified radiologists, specialized technical staff, two Mammography Coaches, and Diagnostic Imaging Centers give access to treatment to more than 40,000 women annually.”