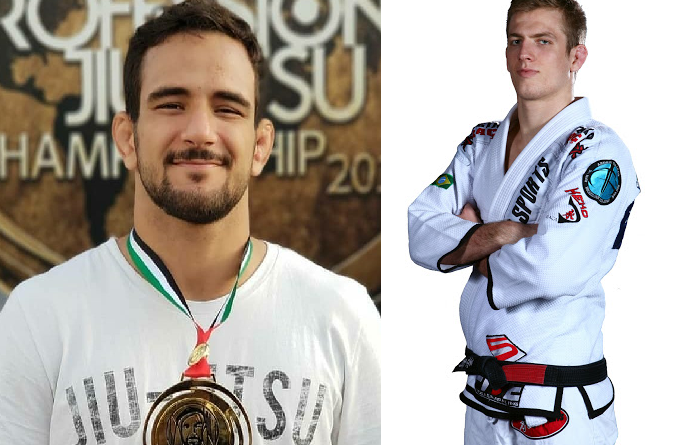 F2W 149 just got a major update! Keenan Cornelius will fight Gabriel Almeida from Checkmat in the main event. Fight to Win is going back to Dallas, Texas, for the 149th event on August 14. Expect fireworks for this one as the match-ups are quite compelling!

Cornelius is coming back for more after a successful debut with the promotion at F2W 148. He battled Matheus Luna to win a unanimous decision in his first match with the promotion. His lapel style proved to be too much for the young Checkmat representative who got outscored under the F2W ruleset.

This time he will be facing Almeida, another competitor from the Checkmat team. Almeida has been very active despite the Coronavirus. He’s been racking up valuable experience against some real giants. In his last four matches, he’s faced some high-caliber opponents like Roberto Jimenez, Fellipe Andrew and Xande Ribeiro. He even beat the young stud Jimenez in a Gi match at Fight To Win 140.

It’s an interesting match-up. Almeida is strong playing both top and bottom. He chooses to play mostly closed guard from bottom. He surprised Roberto Jimenez by pulling guard straight to a triangle at F2W. From there, he kept up his attack. He beat Lucas Hulk Barbosa in a 50/50 war at Europeans last year. I expect him to come out with a similar strategy to his match with Jimenez. This would be smart. You can’t allow Cornelius to settle on any of his grips.

Cornelius’s game is much more intricate. He bases his attacks on elaborate grips to set up his crazy lapel game. I’m biased on this one. Though on a different level, I’m kind-of a lapel player myself, and I think once Cornelius gets to his grips, it’s almost impossible to stop him. Almeida is going to have to be wary of Cornelius establishing those grips. He often starts from what he calls the foot under lapel off-balance as his main offensive move. From there, he either enters into squid guard or reverse de la worm; depending on what leg his opponents put forward.

Cornelius’s squid guard is dangerous and omoplatas are his main attack from the position. He’ll be spamming attacks from this position if he reaches it. His reverse de la worm guard is back take galore, and he’ll often attack arms based on his opponents basing out to stop the back take. If you like lapel guards, you should be on the look-out for this one.

The big clash of styles in the female division

The F2W 149 preview wouldn’t be complete without taking a look at the co-main event. It’s a match-up between Jena Bishop and Luiza Monteiro. Bishop is a No Gi World Champion, Masters World Champion and ADCC trials winner. This is a very intriguing match-up if you know these two beasts. Bishop plays a very strong closed guard and mixes it up with matrix attacks to the legs when opponents stand up. She is a strong passer as well, generally opting to expose the back by moving the legs and forcing her opponents to turtle.

Monteiro plays a very well-rounded game, where she opts to play top or bottom depending on her opponent. When on bottom, she either plays closed guard or open guard with a collar and pant or sleeve and pant grips. On top, she is very difficult to score on and plays a heavy positional game. It’s interesting to point out that these two have already faced each other at F2W 117, where Bishop earned a unanimous decision win. This is a chance for Monteiro to even things up.

The ultimate “anything can happen” match up

The third featured match-up of the card, Lucas Pinheiro will face Junny Ocasio in a No Gi scrap. Pinheiro is a heavy guard passer and Ocasio is a jack-of-all trades. It’ll be interesting to see what this match-up brings to the table, since they’ve never faced each other. Expect Ocasio to pull guard and attack the legs with his newly found leg locking expertise, while Pinheiro tries to clear the legs and pass.