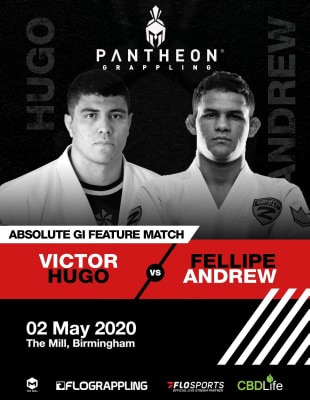 After submitting the notoriously tough Keenan Cornelius in the final of the Absolute Divisions at the Europeans back in January – and winning gold – Fellipe Andrew is coming back to Europe to fight Victor Hugo at Pantheon 3 in the promotion’s first event since their partnership with Flograppling which should see an improvement in production value. Hugo and Andrew are fighting on the main event, alongside Ashley Williams v Geo Martinez for the Featherweight Title. The event will take place on May 2nd 2020 at The Mill in Birmingham, England and will be streamed live on Flograppling.

Victor Hugo Marques is a Brazilian jiu-jitsu black belt under the Ribeiro brothers and a world No-Gi champion. At purple and brown belt Hugo won first place in the IBJJF World Championships in 2016 and 2017 (purple) as well as 2018 and 2019 (brown) – making him a challenging opponent in both the Gi and No-Gi.

After suffering a frustrating defeat in his first IBJJF World No-Gi championships as a black belt, he bounced back and beat Roberto ‘Cyborg’ Abreu to win gold in the Absolute division at the No Gi World Championships. While his last Superfight was against Nick Rodriguez and under No Gi rules, Hugo has agreed to face Fellipe Andrew in a gi match for the Main Event of Pantheon 3.

Fellipe Andrew Silva is a Brazilian jiu-jitsu black belt under Rodrigo Cavaca. Fellipe is rapidly succeeding in the world of BJJ. Andrew was up against Keenan Cornelius in the Absolute Final of the 2020 Euros. He submitted Keenan with a triangle, coming out as champion, in first place. What a great way to start 2020. His humble attitude will definitely get people rooting for him on the rematch. Will the underdog come out on top again?

This will be the first time the two have fought together as black belts. Now Hugo might’ve won the first time around, but will the underdog knock him off the podium? Pantheon 3 goes down on May 2nd in Birmingham, England. You can watch the fight between Victor Hugo and Fellipe Andrew live on FloGrappling.

Lucy Wynne has 97 posts and counting. See all posts by Lucy Wynne