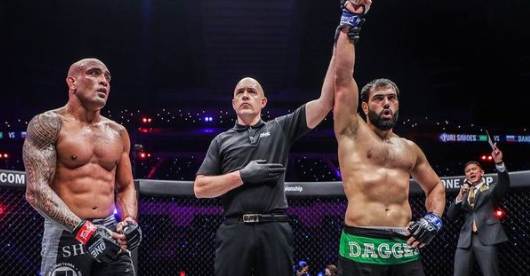 Accomplished grappler Yuri Simoes has struggled in the early-going of his MMA career. On Friday at ONE Championship: Full Circle, Simoes dropped his professional MMA record to 0-2, losing a razor-thin decision to the undefeated Daniyal Zainalov.

Simoes spent much of the first round on his back attacking from the guard. And while he did threaten a close heel hook at the end of the round, he ate a number of ground strikes from Zainalov.

In the second round, Simoes found success on the ground, taking Zainalov’s back while threatening a choke for minutes. And in the third, Simoes struggled on the feet, but nearly secured an armbar late in the round.

Ultimately, Zainalov was awarded the split decision victory. ONE Championship bouts are scored on their entirety, rather than on a round-by-round basis.

Watch the full fight between Yuri Simoes and Daniyal Zainalov at ONE Championship: Full Circle:

Simoes took to social media to react to the controversial loss.

That was an entertaining battle.. but where was the justice behind this decision from the judges?! 🤷🏽‍♂️

What most people don’t know is that I had a short 5 week notice sprung on me to accept a fight with a very tough, undefeated opponent. Sacrifices had to be made including losing 32 pounds while being hydrated. I knew it was a a tough mission and I trained the toughest camp of my lifetime at a chance to win.

For it to go down like this was disappointing to say the least. All I wanted is some fairness with this..

Is that too much to ask?

A 2017 and 2015 ADCC champion, Simoes trains out of Caio Terra Academy for jiu-jitsu, and recently started training at American Kickboxing Academy for his MMA training. He is an elite grappler with recent notable wins over Devhonte Johnson, Fellipe Andrew, and Patrick Gaudio.

Simoes made his MMA debut in 2020, when he lost a decision to 15-fight beteran Rong Fan at ONE Championship.