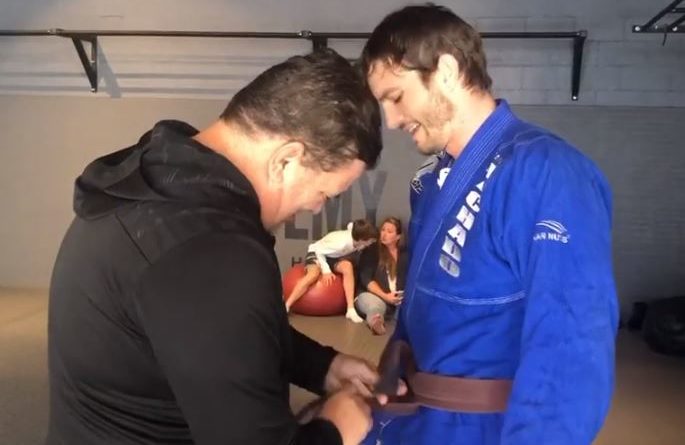 Riccardo Ammendolia posted a surprising picture today to his Facebook feed: Ashton Kutcher getting a brown belt from Rigan Machado.

It might seem fast, but Kutcher was promoted to purple belt back in late 2014, which was almost 5 years ago. There were rumblings at the time that the promotion was too swift. At the time, Machado gave responses to this criticism, stating Kutcher’s wrestling background and quick ability to learn.

5 years at purple belt does not seem like too little time, so those criticisms will likely not surface this time around.

Bobby Razak posted the video to his Instagram feed, watch below.

Congrats to my bro today ???????? and my Master the legendary Rigan Machado the ????#ashtonkutcher #bjj @aplusk

Kutcher first learned of Jiu Jitsu when visiting Rio De Janeiro and trained to stay in shape, starting at Ricardo De La Riva’s Academy. He stuck with the art, training under Rigan Machado when he got back to California. Now that Ashton Kutcher has his brown belt, it’s likely only a matter of time before he gets his black belt.

We wrote about the history of the Machado Jiu Jitsu schools back in August, check it out here.