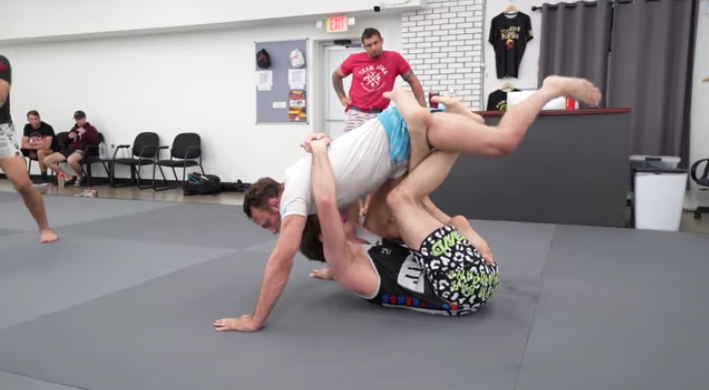 The B-Team in Austin, TX is quickly becoming a training destination for BJJ hobbyists and elite competitors alike. Recently, veteran black belt and no-gi world champion Keenan Cornelius stopped by The B-Team, and cameras were nearby when he rolled with Craig Jones.

Watch that roll below.

What we see above is a fun but friendly roll. Cornelius’ flexibility is on full display as he plays guard; in his prime, Cornelius had one of the best guard — either gi or no-gi — in the world. We also see Jones continuing to work on his top game, securing a takedown and consistently looking to pass the guard from headquarters position.

Jones founded The B-Team alongside Nicky Ryan, Nick Rodriguez, and Ethan Crelinsten following the dissolution of the Danaher Death Squad.

An ADCC silver medalist, Jones is widely considered one of the best no-gi grapplers on the planet, although he has struggled to find success lately. Jones has lost back-to-back matches: a disappointing decision to current UFC welterweight Sean Brady at Fury Grappling, and a decision loss to Pedro Marinho at the most recent Who’s Number One.

Cornelius has been out of competition since 2020. He is an accomplished competitor in both the gi and no-gi, owning multiple European Open titles, gi and no-gi Pans titles, and a 2014 no-gi world championship. In late 2019, Cornelius split from his former academy Atos and founded Legion American Jiu-Jitsu in San Diego, CA.