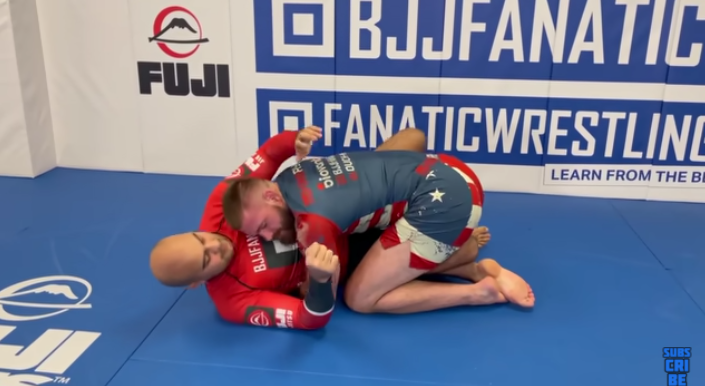 The body lock guard pass is currently one of the most popular and effective techniques in the jiu-jitsu metagame. Owing largely to the influence of John Danaher and his numerous elite-level students, the body lock has proven to be an excellent way to shut down dangerous no-gi guards.

Perhaps no competitor has found greater success with the body lock guard pass than Gordon Ryan. As a part of his most recent instructional on BJJ Fanatics, Ryan spoke with Bernardo Faria about the finer points of this technique.

Ryan defines three different but fundamentally similar ways to complete the body lock pass: stuffing, shelving, or splitting the legs. From there, he completes the pass differently depending on how the guard player reacts.

One common reaction to the body lock pass, particularly in a points-based competition, is to turn to turtle. Ryan knows this reaction is possible, and stays ready to take the back.

“Our whole thing is, we play a dilemma between pinning the guy if they face us, and taking the back if they turn away,” Ryan said.

What makes the body lock pass so powerful in modern jiu-jitsu is that it shuts down most leg lockers.

“Normally I use body locks whenever I’m encountering a strong seated guard player… This is a great way, number one, to shut down ashi-garami specialists…”

Gordon Ryan was a 2019 ADCC double gold medalist and is considered by many to be the best pound-for-pound no-gi competitor in the world. Ryan competed just a few times in 2021. He earned two dominant submission wins over Roberto Jimenez and Vagner Rocha before announcing his leave of absence from competition due to chronic stomach issues in May. In October, Ryan returned to face UFC fighter Philip Rowe in an exhibition match at Who’s Number One.