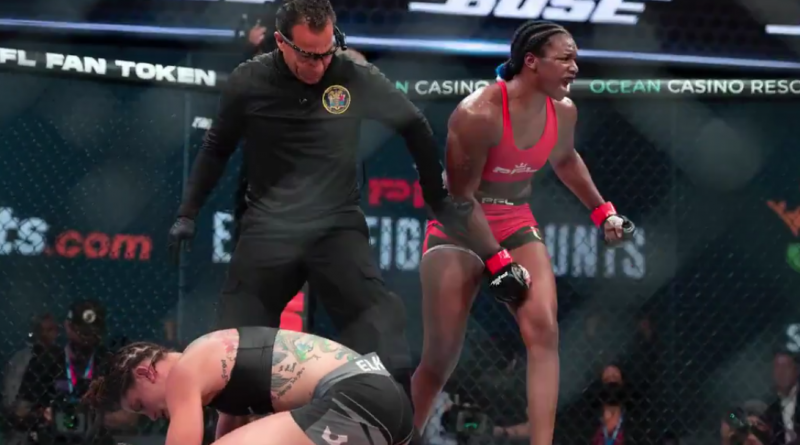 Claressa Shield walked away from her MMA debut victorious, but she had to face plenty of adversity along the way. Squaring off against grappler Brittney Elkin at PFL 4, the two-time Olympic gold medalist in boxing had her ground game tested early and often, but ultimately survived to win by ground-and-pound stoppage in the third round.

Given Claressa Shields’ prodigious accomplishments in boxing, it’s no surprise that her MMA debut was one of the most anticipated in recent years. The PFL did Shields no favors for her first fight in a cage, as she faced Fight to Win veteran and BJJ brown belt Brittney Elkin. Although Elkin’s record sat at an unimpressive 3-6 going into the fight, her jiu-jitsu focused style of fighting seemed tailor-made to give the boxer Shields problems.

Indeed, Elkin was able to take the fight to the mat early, where she unloaded with ground strikes late in the first. That trend continued through the second round, as Elkin seemed to tire drastically as she tried to finish Shields.

As expected, Shields looked impressive on the feet. Her hand speed and power is arguably the best in all of women’s boxing, and she is several steps above even high-level strikers in MMA.

In the third round, Shields was finally able to escape Elkin’s ground attack, who was by that point entirely exhausted. A rejuvenated Shields saw her opportunity and pounced.

While Shields (and some fans) might be disappointed in her grappling, it’s worth noting that she has only been training in MMA for seven months. It’s no surprise that Elkin — a seasoned grappler that has shared the mats with some of jiu-jitsu’s elite — was able to find plenty of success on the mat. However, Shields showed true composure and heart in surviving nearly 10 full minutes of ground control and strikes only to mount a dramatic comeback in the third.

If she wants to, Shields appears to have plenty of ability to reach the highest levels of MMA, just as she did in boxing.