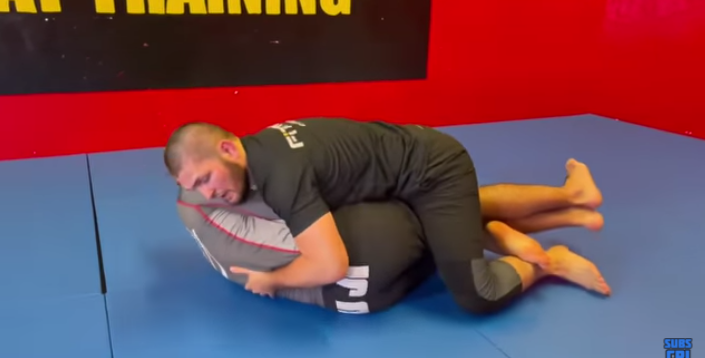 Former UFC lightweight champion Khabib Nurmagomedov is widely considered one of, if not the best lightweight MMA fighter of all time, and he did it all with a brutally crushing top game. The “smesh,” as it’s commonly known, led to victories over the likes of Conor McGregor, Dustin Poirier, Rafael dos Anjos, and Justin Gaethje. In a recent video with Bernardo Faria of BJJ Fanatics, Nurmagomedov shared the details behind his legendary top pressure.

The key, says Nurmagomedov, is using your hips and legs to control your opponent, rather than your arms. This is a form of control and muscle memory that requires practice, and to that end, Nurmagomedov likes to try to hold his training partners down without using his arms. This way, he can develop the muscles and sensitivity to hold an opponent with only his legs.

“When I drill this, I just put someone down, I sit on mount, and I tell him, ‘escape.’ I don’t do nothing with arms,” he said.

“You have to control your opponent with legs. Arms are used for punching or submission,” said Nurmagomedov.

Khabib Nurmagomedov retired from MMA last year with a perfect 29-0 record and the UFC lightweight belt.