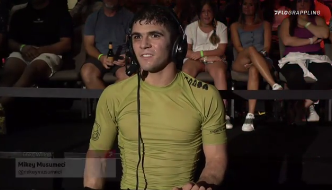 At The Road to ADCC on Saturday, Mikey Musumeci extended his run through the no-gi scene with a 6-0 points win over 10th Planet standout Geo Martinez. It was a hard-earned victory for Musumeci — an extended leg shootout that saw Musumeci taking the back and dominant position in the closing minutes. But immediately following the match, Musumeci and Martinez appeared to exchange words. Musumeci then exchanged words with Martinez’s coach, Eddie Bravo.

In Musumeci’s post-match interview, he explained what rubbed him the wrong way.

“I’m so disappointed in the behavior he had with me on the mat. What a low class person,” a very fired-up Musumeci said.

In the lead up to the match, Martinez had made a social media post that seemed to reference Musumeci’s practice of writing his posts in both English and Spanish. Musumeci took issue with that.

“I always rooted for him… I thought we were friends,” said Musumeci. “And then he just completely changed his persona. I guess he cares more about followers than how he interacts with people… I have so much respect for his jiu-jitsu. As a person, I have zero respect… You should get kicked out of your gym if you act like that in the gym or a tournament.”

It’s not entirely clear what Martinez or Musumeci said to each other during or immediately after the match, but with Musumeci’s strong words, it’s hard to see this rivalry ending here.

Ben Coate has 504 posts and counting. See all posts by Ben Coate