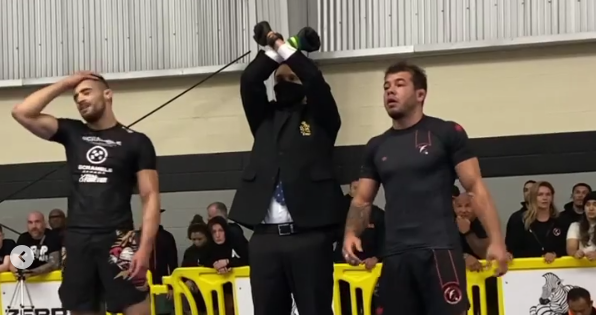 Danaher Death Squad member Oliver Taza was one of the most exciting additions to the 2021 no-gi Pans middleweight black belt division. With the new IBJJF leg reaping rules for brown and black belt competitors in place, Taza and his leg locks stood a real chance at winning gold. That wouldn’t be the case, though, as Taza lost by disqualification to Rodrigo Barbosa of Fight Sports in the first round.

After Barbosa earned an early two points, Taza spent the majority of the match working to pass Barbosa’s open guard, eventually getting to Barbosa’s back with a fully-locked body triangle. Using a move seen in gyms around the world and made famous by Vagner Rocha, Taza gripped his hand over Barbosa’s mouth, either to expose Barbosa’s neck or force him to uncover his mouth. Barbosa quickly protested.

After some confusion, the referee stopped the match and awarded Barbosa the victory by way of disqualification.

Taza is one of the sport’s more active black belt competitors, and had already found success in IBJJF competition in 2021, winning the Houston and Dallas no-gi opens. He is set to compete next on May 28 at Who’s Number One, where he will be taking on Jonatha Alves in a submission-only match.