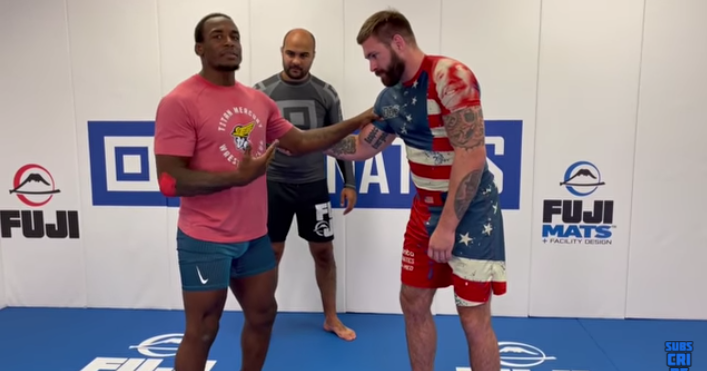 J’den Cox and Gordon Ryan are two of the absolute best at what they do. Cox is a three-time NCAA Division I national champion and Olympic bronze medalist wrestler, while Ryan is a multiple-time ADCC champion and widely considered the best current no-gi pound-for-pound grappler in the world. Recently, BJJ Fanatics front man Bernardo Faria put Cox and Ryan together to discuss and demonstrate the best takedowns for grappling.

In the video above, Cox demonstrates a pair of takedowns: the high single leg and the blast double leg. Both attacks work well for grappling, says Cox, because they keep the attacking grappler’s head safe from guillotines by keeping it pinned to the opponent’s chest.

Additionally, Cox emphasized that the key to landing successful takedowns is the set-up and finding an angle from which to attack.

“I work hard in my set-up so the finish is really easy… Create an angle so that when I get this angle, it’s really easy for me to drive you down or pick you up,” Cox explained.

For his part, Ryan explained that the hardest part of grappling with Cox was the hand fighting; Cox made it nearly impossible for Ryan to achieve a grip.

“First of all, every grip that I go to make with him just becomes his grip, and the second he makes a grip, he’s always moving to an angle,” said Ryan.

Gordon Ryan is currently on an open-ended leave of absence to deal with ongoing health concerns. He recently announced that he, along with his longtime coach John Danaher, are moving to Austin, TX to open a jiu-jitsu academy.