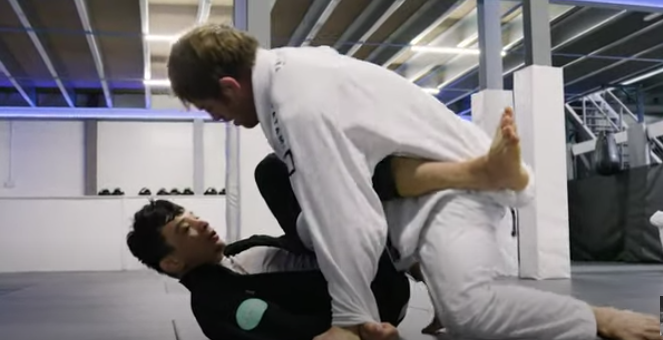 Elite grapplers Paulo Miyao and AJ Agazarm both competed at Polaris 18 on November 27. After the event, Miyao and Agazarm took the opportunity to train and roll together, bringing together two unlikely training partners from different sides of the country.

Luckily, a camera was on hand to catch the roll on film. Watch that below.

What we see above is a fun and competitive roll, with the berimbolo specialist in Miyao happily working his pressure passing and top game, while the high-level wrestler Agazarm plays from his back with advanced lapel guards.

Both Miyao and Agazarm lost at Polaris 18. Miyao lost a razor-close decision to ADCC European Trials winner Ashley Williams in a gi match, while Agazarm lost a decision to leg lock specialist Jed Hue in a no-gi match.

Paulo Miyao and his twin brother Joao are two of the best competitors of their generation. As a part of the then-new wave of jiu-jitsu players specializing in the berimbolo, Miyao won an IBJJF brown belt absolute world championship as a featherweight. As a black belt, he is a multiple-time Pans and world champion, and has been one of the sport’s most active competitors for nearly ten years. Miyao is also a two-time ADCC bronze medalist, with wins over top competitors like Tye Ruotolo, Nicky Ryan, and Geo Martinez.

A former Division 1 college wrestler, AJ Agazarm was a 2014 IBJJF no-gi world champion and a 2017 ADCC silver medalist. In the past few years, he has competed infrequently in jiu-jitsu, instead pursuing his MMA career; he holds a 3-2 professional record. Prior to Polaris 18, Agazarm competed at BJJ Stars 7 and the IBJJF no-gi Worlds (in the ultra heavyweight division).