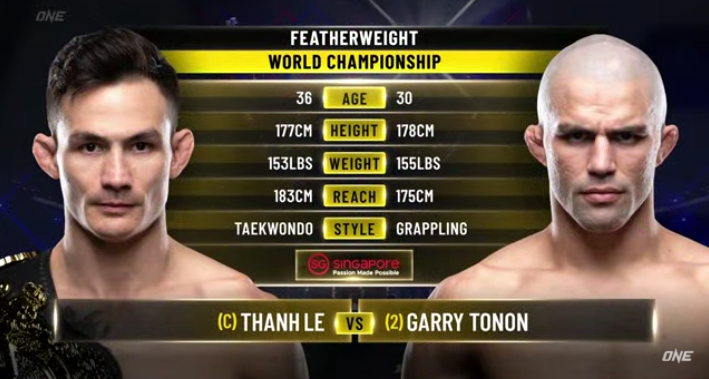 Grappling superstar Garry Tonon has suffered his first loss in MMA. On Friday at ONE Championship: Lights Out, Tonon was knocked out in the first round of his lightweight title bout against current ONE champion Thanh Le.

Watch the full fight below.

Tonon came out aggressive early, pressing the action and throwing high kicks. When Le attempted to counter one of those kicks with a punch, the fight went to the mat where Tonon immediately wrapped up a leg. Le was clearly prepared for this type of attack, as he methodically untied Tonon’s points of control while throwing big ground strikes. Those strikes quickly added up, with Le securing the knockout early in the first.

An ADCC medalist, Tonon came into this bout with a perfect 6-0 record. Despite the loss, he remains one of MMA’s most promising fighters. And with his all-action style and knack for finding the submission, Tonon’s star-power likely won’t take much of a hit from the loss.

With the win, Le improves his record to 13-2. This was his first defense of his lightweight title, which he captured from Martin Nguyen in October 2020.