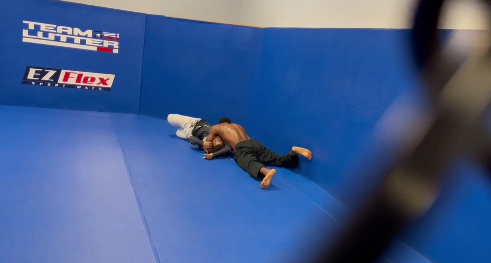 Kevin “Trailblazer” Holland has done what countless other professional fighters have surely wanted to do — faced one of his internet trolls. On Saturday, Holland — an 11-fight UFC veteran — posted video on social media showing what appears to be the tail end of a grappling match Holland had with someone that had been accosting him on the internet.

As one would expect, we see Holland tapping out his opponent here. What one might not expect, is that Holland says he paid for the man’s transportation and lodging. While a free trip might sound appealing, is it really worth it to have yourself put on blast to Holland’s combined half-million plus followers?

For many fans and media members, Holland was the 2020 MMA fighter of the year. The out-spoken Travis Lutter black belt went 5-0 that year, capped off by a spectacular knockout of Ronaldo “Jacare” Souza at UFC 256.

Holland struggled in 2021, going 0-2 with one no contest. Holland also recently tried his hand at professional grappling, losing a decision at Fury Pro Grappling 3.