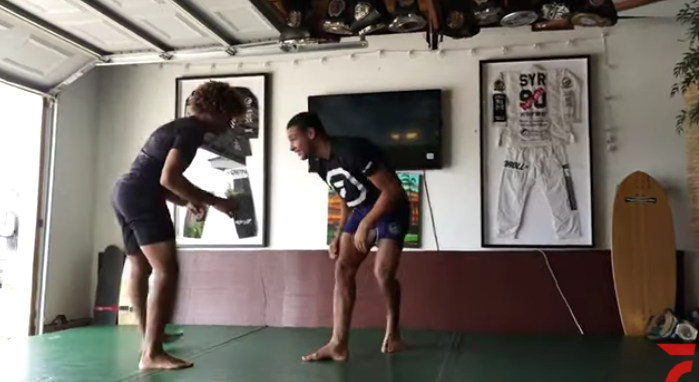 Twin brothers Kade and Tye Ruotolo are 18-year old jiu-jitsu phenoms that are already comfortable competing and winning at the highest levels of the sport. What’s more, they’re two of the most exciting grapplers on the planet, known for their all-action, all-aggression style that lends itself well to submission-only formats. It makes sense, then, that their together are entertaining.

In a recent video released by FloGrappling, fans are treated to an insane 17 minutes of the Ruotolo brothers rolling together in their garage.

What we learn from this video is that the brother do not hold back when rolling with each other. From slaps to hard throws to smothering the face, Kade and Tye are each going for the kill the entire time. Moreover, we see the brothers specifically preparing for submission-only formats, as they do not seem interested in merely establishing dominant position. Rather, they are both hunting for submissions, often at the expense of position.

We also see Tye getting the taps on Kade, but that much is to be expected; Tye is the larger brother that typically competes at a higher weight class.

Both Kade and Tye Ruotolo are accomplished competitors, and both are brown belts under Andre Galvao at Atos.

Tye Ruotolo has competed twice this year, first with a dominant late-notice victory over William Tackett, and next in a hard-fought decision loss (again on late notice) to Craig Jones. Kade Ruotolo has competed three times in 2021, first with two spectacular submission wins over Ethan Crelinsten and Cole Franson, and most recently in an ultra-entertaining loss to Roberto Jimenez at The Road to ADCC.

Both of the Ruotolo brothers are slated to compete at the Who’s Number One Championships on September 25-26.