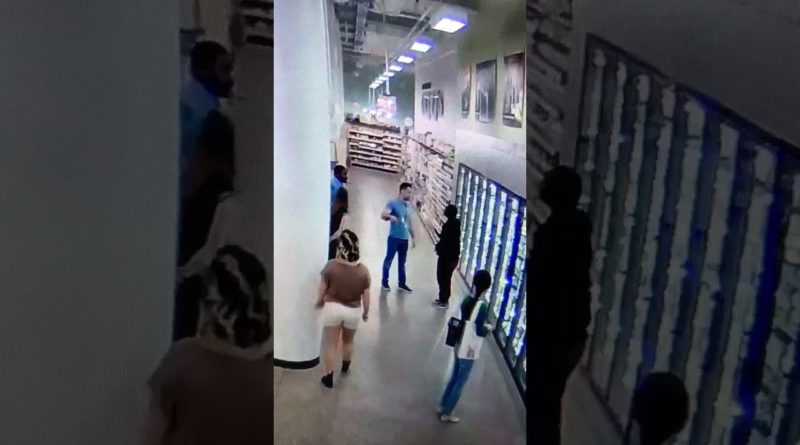 Footage has emerged of a local BJJ black belt by the name of Kyle Braun, who also doubles as a grocery store manager, being forced to use his skills in an altercation with an aggressive customer. Braun trains out of Main Line United in Ardmore, Pennsylvania and works in a local convenience store, where the action took place. The footage comes from a security camera in the store and starts at the point that Braun confronts the customer, who was at this point already banned from the store.

According to comments Braun left on the footage when it was posted, the customer in question regularly shoplifts from the store, so Braun has previously asked the customer to leave and not return. The man continued to come to the store and the above footage starts when Braun “nicely asked him to leave”. The camera footage also clearly shows the man spitting at Braun on at least one occasion, if not two, and making clear threats of physical violence. The customer then follows this up by swinging for Braun twice and appears to make contact with both punches, before Braun quickly obtains double underhooks and takes the customer down, moving into knee on belly to restrain him.

Of course, as is the way of the internet, multiple comments were left on the original video criticizing the black belt store manager for the way he handled the situation, so he left the following reply:

“I think some people are missing the point, maybe because I didn’t make it well enough; This wasn’t ideal self defense, I definitely let this guy get way too close to me (multiple times), and probably would have been justified in putting my hands on him after the first time he spit on me. I had every reason to show as much restraint as possible, I was at work (not “on the street”), being filmed, had a small crowd gathered of both customers and my employees, I HATE violence and this is already an ugly scene, and this is *literally* my first “fight”. I’ve never in my life come to blows with anyone that I wasn’t training with or in a cage/ring with along with a referee. I HATE confrontation, and honestly, I was scared throughout this entire thing. I basically froze. But, jiu jitsu is so simple in its application and so efficient practically that it can let someone, like me, who’s never been in this situation, defend myself pretty effectively. So, all the wanna be cops and would-be master assassins can keep those critiques to themselves. Yes, you would have murdered anyone who even looked like he MAY have spit on someone at some point, I get it. I spend most of my time pulling guard, so shut up.”

Fortunately, both men left the scuffle without any serious injuries beyond a few bumps and bruises. Of course, this is nowhere near the first time that a trained civilian has had to use grappling to subdue an opponent.