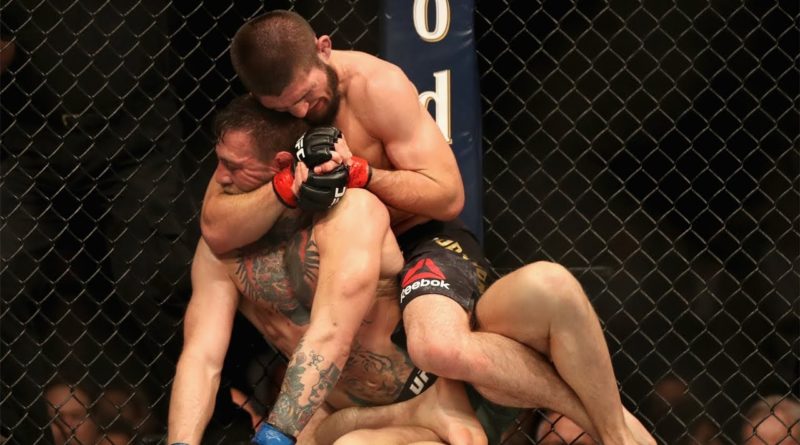 A Neck Crank is a truly brutal submission as it relies on applying enough pressure to your opponent’s neck in order for them to feel as though their neck might break if they don’t tap, that’s why it’s not such a common submission in the UFC. While many chokes might have a neck crank element involved, most notably head and arm chokes like D’arce Chokes, it’s rare for a fighter to attempt a pure crank, without any choke involved.

The first example in the above video is also probably the most famous and it comes from the man probably best known for relentless takedowns and brutal submissions after what feels hours of ground and pound, Khabib Nurmagomedov. The sequence starts with Nurmagomedov on top and landing shots to Conor McGregor until he forces him to give up his back. From here he quickly shoots an arm across his opponent’s neck and starts to lock up a Rear-Naked Choke, but quickly switches to a palm to palm grip to start tearing Mcgregor’s head off his shoulders.

Next comes Frankie Edgar, who applies his neck crank from the same position, on Cub Swanson’s back, but with a traditional Rear-Naked Choke grip instead of a modified one. Tito Ortiz makes an appearance after this and although he’s probably best known for his high-amplitude takedowns and endless cardio, he can be seen here getting the tap against Yuki Kondo with a Neck Crank from Side Control at UFC 29. Perhaps most surprisingly, the above video also features Frank Shamrock, one of two brothers who seem to feature on virtually every collection of submission finishes in UFC history.

For those of you who want to learn the most common neck crank, the fulcrum choke, from a UFC veteran, click here to let Dean Lister show you.